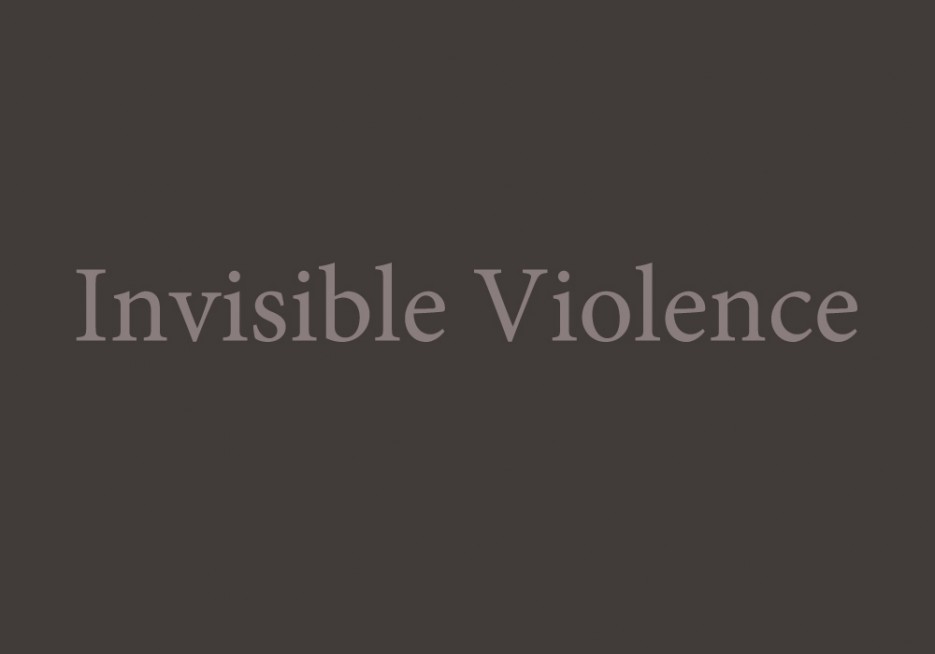 To explore the artists’ works and the topic of violence in collaboration rather than in isolation, the curator Liz Park and photo-scholar Judy Ditner engaged in a process of exchange. Seeking to open up each other’s readings, we jointly authored this text to point to some key issues the artists take up, and to offer partial descriptions of and ruminations on the artworks.

In White Thread (2003), a woman is bent double and wrapped in a long strip of red fabric. She reappears in Untitled (2004), this time bound by lengths of white cloth. In this series of three photographs, she is displayed as though hanging on a gallery wall, like a delicately wrapped specimen, a funerary object, or an artwork. The unadulterated nowhere space of the museum – with the pristine white walls, drapery, and plinth –transforms her into an objet d’art as she strikes beautiful poses.

Acts of violence and conquest against and of women have an extensive history of being turned into alluring visual depictions, ostensibly to teach moral lessons or to extol noble virtues. Throughout the history of art, women’s bodies have been forced to assume contorted yet idealized poses, resulting in a visual language that conflates sensations of great ecstasy with suffering. This long-established western canon of feminine beauty became increasingly coupled with imperialist representations of otherness in the nineteenth century, propagating epistemic violence against the colonized. Belmore’s photographs visualize how such violence – the violence that eschews non-dominant modes of knowing the world – has systematically structured museums where the material culture of “the other” came to be cared for, curated. Today, the museum has a conflicted relationship to its own lineage, and frequently enlists artists, curators and other cultural producers to provide critique. But this unfolding relationship finds no resolution.

An old photograph with worried edges frames a lone tree that is illuminated by the camera’s flash. Below the branches, a dark void indicates an erasure, while the faces of a gathered crowd peer upwards, intensely interested in this absence. The title Erased Lynching reveals the reason for the gathering and the artist Ken Gonzales-Day’s intervention in the image. Turned into postcards, such photographs of lynch-mob executions were mass-produced yet intended for individual viewing, transforming spectacle into a private event. Purchased but not posted, collected and kept as a memento, one such postcard is personalized with the hand-written statement, “This is what he got.”

Events of spectacular violence—violence transformed into spectacle—have often been photographed, collected, and shared. That such acts were recorded from the side of those responsible for the violence suggests a sense of righteousness the perpetrators must have felt. Yet these same photographs become evidence against the executioners. What were once considered trophies become condemnations of the violent hatred enacted against those who didn’t fit into the dominant white hetero-normative society. By erasing the damaged body, Gonzales-Day’s photographs transform the spectators—indifferent, intrigued, fascinated—into the object of spectacle and condemnation. His works scrutinize how such events were recorded and imaged, using these photographs and postcards to retrace and locate the sites at which they occurred. The partially erased photographs create a hyper-aware viewing process, bringing the viewer’s attention back to the act of looking itself, reflecting on what is visible, but also what remains invisible.

The handwriting on the back of a postcard describes an unremarkable photograph of a boy. The artist, Francisco-Fernando Granados, does not show this image, yet his words offer a personal response to this very public picture, taking issue with the iconicity of the photograph that has been widely circulated, subjected to texts and contexts that direct how and what the photograph means.

Transforming an image into an icon requires that it be controlled, simplified, caricatured. The image must be reduced to its base elements so that it can carry wide-reaching messages and meanings that were not necessarily implicit in it. Such is the case of the widely circulated photograph of Omar Kadr, taken when he was 14 years old. Just as the boy’s body was controlled, contained, imprisoned, his image has been instrumentalized in discussions of the countless unnamed others who are detained and interrogated without due process.

Withholding an image can be seen as a form of iconoclasm. It can also be a call to pause and consider the multiple agendas that any given image can serve, compelling viewers to consider the channels of meaning and circulation of the reproduction. Granados knows this, and fully owns his subject-position and uses his personal response to question the way Khadr’s portrait has been used. By withholding the photograph Granados refuses to take a side in the struggle over the image, and asks the viewer to pause and consider the multiple, conflicting directives given in the name of an image.

The haunting black-and-white, hybrid faces that make up the series Compilation Portraits (1995-1997) are composed of interwoven strips of multiple photographic portraits. These faces hover at the edge of recognition – the warp and weft of Noguchi’s weaving appear like the dot grains of newspaper pictures, or the pixels that make up digital images. But the portraits do not convey the sitter’s singular identity; instead, Noguchi fuses her own face with those of murderers and murder victims taken from the media.

No photograph inherently conveys any complete truth about the person it captures. Photographs are fragments removed from the continuum of their narratives. Although a caption can provide a rudder for the image, there is no inherent correlation between the two. Photographic reproduction, in print or online, depends on the technology of the dot or the pixel, yet these buildings blocks become indecipherable when zoomed in too close. By zooming out, looking beyond the picture and its caption, the conditions of the image’s production and dissemination can be considered and perhaps, deciphered. This work of shifting lenses from micro to macro is fundamental to active and informed practices of looking.

Judy Ditner is a doctoral candidate in art history at Boston University, with specializations in the history of photography and contemporary art. Her current research focuses on the intersections of realism, abstraction, and narrative in photography and video.