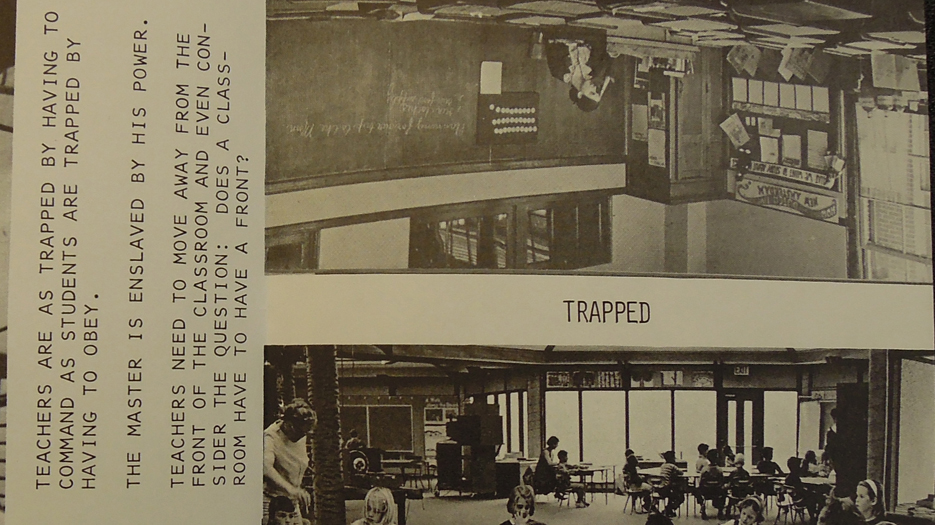 Back to School
Curatorial Statement

Back to School takes its cue from a storefront school called Project Other Ways, a two-year pilot project initiated and directed by artist Allan Kaprow and educator Herbert Kohl from 1968-69. In partnership with local schools and teachers from the Berkeley Unified School District, the duo opened an alternative school where they experimented with happenings as a form of radical pedagogy.1 Located in the former school district offices on 2556 Grove Street in Berkeley, California, the inconspicuous storefront headquarters of Project Other Ways constituted an open house or storefront-environment-teacher-training-community. The project welcomed students, teachers and artists wishing to experiment with performance and conceptual art forms to teach reading, writing and community studies, by replacing existing lesson plans with performance instructions or event scores. Within the history of happenings and performance art, such event scores have ranged from intricately scripted notations, to drawings, to simple and open-ended sets of textual prompts that anyone could perform even in the absence of the artist.

Back to School reflects on this ad-hoc classroom and reinvents some of its methods in order to address contemporary debates on formal schooling and art-as-education practices that exist across institutional structures. The present storefront location of Gallery TPW R&D comprises a hybrid site in which to hold these activities and promote discussion.

In the past decade, various ‘schools’ have emerged as viable artistic and curatorial models for critiquing the existing structures of education in a globalized world. Jakob Jakobsen’s Copenhagen Free University (1999-2007), Anton Vidokle’s unitednationsplaza (2006), Tania Bruguera’s art school Catedra Arte de Conducta (2002-09) and Pablo Helguera’s mobile classroom entitled the School of Panamerican Unrest (2003-06) are just a few of these examples. More recently, the Hayward Gallery in London launched a public learning experiment called Wide Open School (2012), which paradoxically disavowed its status as an exhibition altogether. Unlike most contemporary ‘schools’ that exist either as art projects and exhibition platforms in museums and biennials or as self-organized, free school establishments, Project Other Ways attempted to catalyze reform from within formal education and in particular the local public elementary and high schools.

Rather than participating in the deinstitution-alization of mainstream education at the time, Kaprow and Kohl’s project instituted the conditions for inventing “other ways” of learning and developing a collaborative curriculum, one that would be as open-ended as happenings themselves. Together artists-in-residence, youth and teachers participated in the original project, collaborating to produce new curricula informed by their experience. They were called upon to document and distribute these lessons in the form of pamphlets, posters and videos for teachers to use in their own classrooms and for other schools to study. Through these forms of pedagogical documentation, participants engaged a wider public to reflect on the materiality and structure of their education. This coproduction and sharing of knowledge, which itself arose from the progressive reforms of the 1960s, has become the modus operandi of contemporary artists including Annette Krauss and sound collective Ultra Red, along with institutions like the Centre for Possible Studies in London, among others. This residency shares their concerns: How can youth become active contributors in generating conversations about the existing structures of education, rather than remaining passive recipients of what has already been produced on their behalf? The Back to School residency sets up a challenge to create the conditions in which to experiment, play and discuss education, whether viewed as a bureaucratic, homogenizing system of power and privilege, or as a progressive and creative learning space, with a more heterogeneous public – one that includes both adults and youth. It responds to the realities and crises that exist within formal schooling, critically examines art’s role in proposing alternatives and offers an opportunity to discuss these problems together.

The storefront school serves as a conceptual model for thinking across institutions—both the classroom and the gallery. Kaprow and Kohl regarded their ad hoc laboratory as a place to experiment with their own facilities, learn in an experimental environment and display their ideas. Events that conspire in the classroom are often cloaked by myth and invisibility; they are not unlike those historic happenings and contemporary pedagogical projects that build on the legacies of performance art from Kaprow’s era. In both cases, the value of the inter-subjective exchange that occurs within the closed, private space of the classroom is meaningful only to those present participants, and this defies easy evaluation by a secondary audience, who only come to know such encounters through surrogate forms of documentation, or through anecdotal accounts.2 The attempt to reconstruct, transpose or communicate the live aspects of such performance-based work may prove to be as difficult as trying to recreate the dynamic environment of the classroom once the lesson has come and gone.

All that remains of Project Other Ways is a compilation of curriculum materials that resemble performance ephemera of the era: instructional documents in the form of pamphlets, posters, activity booklets and handwritten notations, as well as an array of photographs documenting some of the activities that transpired in and around Berkeley during those brief years. We might think of these materials as belonging to an ‘expanded performance’—a term developed by Kaprow’s former student Suzanne Lacy to describe the process of preparation and follow up with participants in her community-based art.3 These archival materials are both the residual traces of a teaching and artistic process and documents of collective actions from the past. They could also serve as preliminary guidelines for experiences yet to be—instructional plans for future lessons. Rather than merely trying to reenact these experiences or present visual records of the activities themselves, the possibility of reinventing ways of working with these kinds of documents opens them up to new modalities of teaching and reflecting; ways of learning how to work together in the present.

By using event scores as curriculum tools to be activated, rather than as autonomous artworks to be displayed, Back to School investigates alternative methods of curricular planning, critically examining their radical nature and their educational efficacy today. The perceived openness and improvisational nature of both the set curriculum and the performance score will also be evaluated as participants negotiate the boundaries between guided and free exploration, leadership and collaboration, delegation and individual agency across these different institutional structures. As a result, the R&D storefront space will evolve, registering the traces of these performance workshops with students and teachers. Whatever notes, diagrams, images and archival reproductions materialize in the space will remain on display, just as they would in a traditional classroom. These materials are stand-ins for the workshops themselves, events that we may or may not have directly experienced. Within the context of this residency, they are also documents that make the process of learning and curriculum mapping visible, as research in progress, over the course of three weeks.

These investigations will test out flexible curatorial strategies for thinking through the relationship between performance and pedagogical documentation, the binary between the live encounter and its supplement, using the present exhibition/classroom as a site to imagine these new possibilities. The TPW R&D storefront will remain accessible to the public as an open classroom for research, and these materials will be available for consultation throughout the residency period. What different kinds of framing devices should be employed to transpose one pedagogical relation to another, to form other ways of learning across spaces, publics and curricula? If classrooms are conceived of as closed, invisible spaces that remain inaccessible and unknowable to an outside audience, then the decision to leave the R&D space open to the public allows that binary to be held in tension—thus performatively conjuring the hybrid nature of the historic storefront school, a surrogate classroom that existed in-between public school and private workshop.

1. Happenings were collaborative events that occurred in real time and in common places like supermarkets or streets, using non-art materials, unfolding according to a specific plan or script but without rehearsal. By 1968, the artist was referring to these as ‘activities’, a term he borrowed from Michael Kirby. Within the context of Project Other Ways, happenings were envisioned as a social and playful method of interaction, one that could be implemented into the school system as a “general curricular tool”. ↩
2. See Claire Bishop, Artificial Hells: Participatory Art and the Politics of Spectatorship, London,
Verso, 2012. ↩
3. Suzanne Lacy, ‘Activism in Feminist Perform-ance Art,’ In Education: Documents of Contemporary Art Series (Ed. Felicity Allen), London, Whitechapel Art Gallery, 89, 2006. ↩ 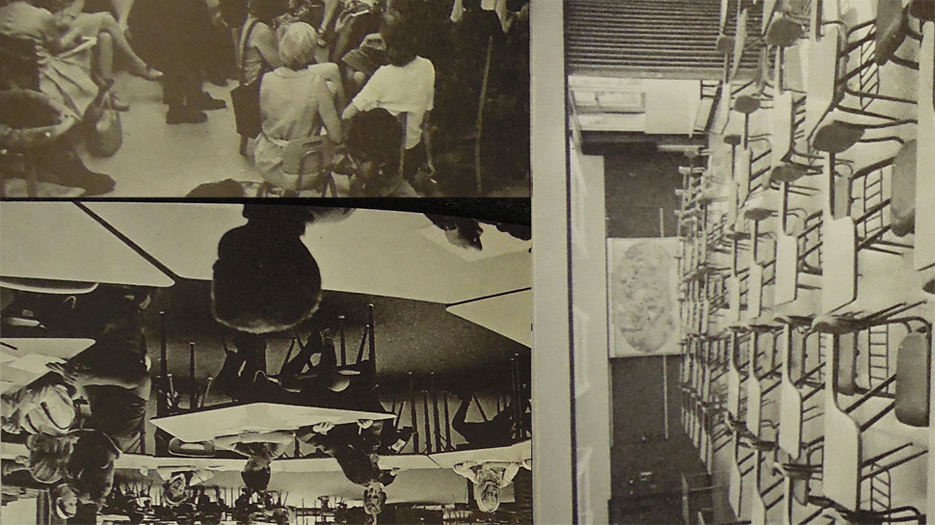 Back to School Curatorial Residency with Vesna Krstich

Gallery TPW is pleased to present a three week residency with art historian, curator and educator Vesna Krstich. Back to School re-envisions the TPW R&D storefront as an alternative classroom space for curriculum planning and experimentation, playing host to a series of school workshops, after-school programs and public events..

Vesna Krstich is a Toronto-based educator, art critic and independent curator. Her research explores the interrelationship between art and experimental pedagogic practices from the 1960s onwards. She received her MA from the Courtauld Institute of Art, where she specialized in Contemporary Art. Krstich’s writing has appeared in Art Papers, Parachute, C Magazine, Canadian Art, and Curator: The Museum Journal, among others.
170 St Helens Ave Toronto, ON M6H 4A1 | VISIT | T: 416.645.1066 | info@gallerytpw.ca | HOURS: Tues to Sat, 12pm - 5pm