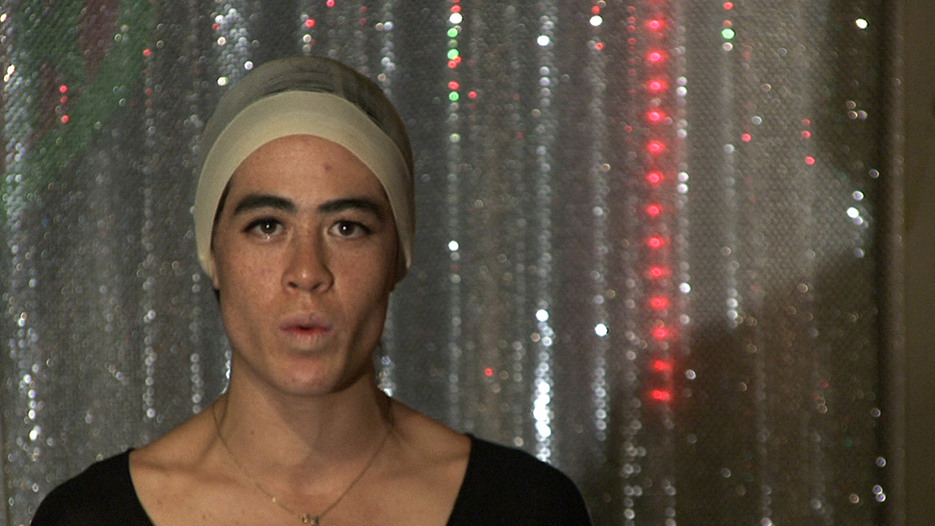 Show’s Over includes Tsang’s video works Shape of a Right Statement (2008) and MISHIMA IN MEXICO (2012), presented in an installation designed by the artist.

Shape of a Right Statement features the artist speaking directly into the camera, a re-performance of a YouTube video called “In My Language” that was delivered through a Speech Generation Device by autism activist Amanda Baggs. The statement potently speaks to the relationship between language and power, and challenges the authority of text-based, symbolic language, describing instead the constant, intense, multi-sensory communication between individual and environment that characterizes autism. Like much of Tsang’s work, the video is about the tension between speaking as an individual and yet always having to speak on behalf of an identity or community as well. Shape of a Right Statement was created through a practice that Tsang calls Full Body Quotation (FBQ), where someone re-performs audio documents (fed through an earpiece) mimetically – not just the text but the tone, breath, accent and idiom of its delivery. Using performance as a form of research, this process reflects on questions of artifice and authenticity, the relationship between content and context, and acts to mediate the performer’s ambivalent feelings towards the source material. Through it, “[we] are forced to confront the performer’s body and skin in relation to a voice, and ultimately their intention.”

Inspired by German director Rainer Werner Fassbinder’s 1974 film Ali: Fear Eats the Soul, Tsang’s recent video MISHIMA IN MEXICO was created in collaboration with Alexandro Segade (best known as co-founder of LA performance art troupe My Barbarian). They perform as a director (Tsang) and writer (Segade), who check into a room in the Camino Real Polanco hotel in Mexico City, and attempt to make an adaptation of Japanese novelist Yukio Mishima’s Thirst for Love (1950). The plot: Etsuko, a widowed society woman falls in love with her servant Saburo, a rural farm boy, but her desire drives them both to tragedy. Slipping in between reality and fiction, as well as in and out of character and exchanging roles mid-way through, Tsang and Segade deconstruct Mishima and his novel in the confines of their modernist hotel room, sparring with the book’s philosophy of eros and experimenting with how to act out the turgid narrative. In MISHIMA IN MEXICO love is thwarted by strict lines of race and class as Tsang and Segade take up the artifice of costume, makeup and melodrama to dramatize the fluidity of identification and how narratives are customized and circulated among audiences – trans/queer audiences in particular.

Wu Tsang's (born 1982) projects have been presented at the Tate Modern (London); the Whitney Museum, Museum of Modern Art and New Museum (New York); ICA Philadelphia; and the Museum of Contemporary Art and REDCAT (Los Angeles). In 2012, he participated in the Whitney Biennial and New Museum Triennial in New York, the Gwangju Biennial and the Liverpool Biennial. He was named one of Filmmaker Magazine’s “25 New Faces of Independent Film” in 2012. His first feature WILDNESS won the Grand Jury Prize for Outstanding Documentary at Outfest 2012, and had its world premiere at MOMA’s Documentary Fortnight before screening internationally. His work is represented by Clifton Benevento, New York. www.wutsang.com

Wu Tsang, Still from Shape of a Right Statement, 2008.
Courtesy the artist and Clifton Benevento.