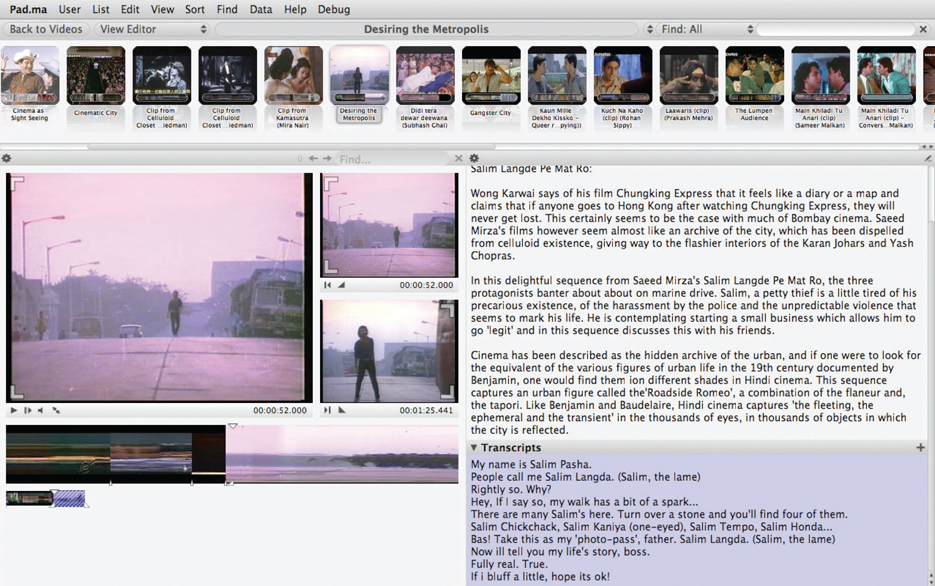 Working in and out
of the archive

Working in and out of the archive presents the results of commissioned explorations of the Pad.ma online archive, with contributions by Reena Katz, Jesal Kapadia & Brian McCarthy and Naeem Mohaiemen, in consultation and collaboration with Pad.ma representatives Shaina Anand and Ashok Sukumaran.

Pad.ma – short for Public Access Digital Media Archive – is an online platform that aims to reimagine the shape, form and function of an archive. It consists primarily of footage, not completed films, and its focus is not only collecting images but enhancing those materials with an array of textual annotation and unique visualization possibilities. Focused on material from India, Pad.ma contains more than 1,200 hours of footage, all of which is searchable, viewable and free to use for non-commercial applications.

As a means of exploration – looking at its contents, structures, and possibilities – Gallery TPW, Pad.ma and Images Festival invited a group of artists to respond to the archive. Naeem Mohaiemen is digitizing an unedited collection of 40 Hi-8 tape interviews he shot in Bangladesh in 1993–1994 – a project that had been abandoned in the face of a personal reckoning about the “good war.” Reena Katz will present a series of audio performances centred on dialogue from the 1983 film Razia Sultan. Working through keywords, videos, annotations, still images and audio files, Jesal Kapadia and Brian McCarthy will evoke a possible imaginary of counter-or alter-development: what radical perception of the preconditions of capitalist “development” do activist media make possible? Their reassembly of the archive will provide a model for a revisualization of inhabitation, territory, memory, and collectivity within the context of contemporary land and housing contestations in India. The artists’ inquiries into Pad.ma will manifest in online edits, performance gestures, and guided tours of specific material in the archive, viewable online at the gallery.

These inquiries into Pad.ma will manifest in online edits, guided tours of specific material in the archive and new texts viewable online at the gallery for the duration of the festival as well as a discursive event pairing a conversation about the project with performances and talks by some of the artists.

Reena Katz works with the transmission and reception of sonic information present in the human voice. She uses live and recorded talking, whispering, yelling and listening to consider bodies as sites of knowledge, and communication as a social and political practice. Her projects have been performed, played, and exhibited widely in North America and Europe. Katz is currently acting director of Galerie SAW Gallery in Ottawa.

Brian McCarthy is a writer based in Brooklyn, NY. As a curator of experimental film and video he has collaborated with Anthology Film Archives, Electronic Arts Intermix and 16Beavergroup in New York. He has taught at the New School for Public Engagement in NYC. Jesal Kapadia is an artist based in Brooklyn, NY and Cambridge, MA, and is currently a lecturer in the department of ACT at MIT. She works in various mediums; the book, the archive, the photograph, experimental film, video and performance. Together their interests lie in an ethical praxis of being-in-common and the cultivation of an awareness of art that is place-based, diversified, multiple, small-scale, cooperative, decentered, socially embedded and autonomous.

Pad.ma – short for Public Access Digital Media Archive – is an online archive of densely text-annotated video material, primarily footage and not finished films. The entire collection is searchable and viewable online, and is free to download for non-commercial use. The Pad.ma project was initiated by a group of collectives consisting of CAMP, from Mumbai, 0×2620 from Berlin, and the Alternative Law Forum from Bangalore.

From Gulf to Gulf to Gulf
Thursday 10 April, 2014 7pm
Screening at The Royal Cinema.
The Images festival presents From Gulf to Gulf to Gulf a film by CAMP (Shaina Anand and Ashok Sukumaran) a film offering an unmediated view of the experience of merchant seamen who traverse the Arabian Sea from the Gulf of Kutch in Western India to Pakistan to the coast of Somalia and the Persian Gulf.