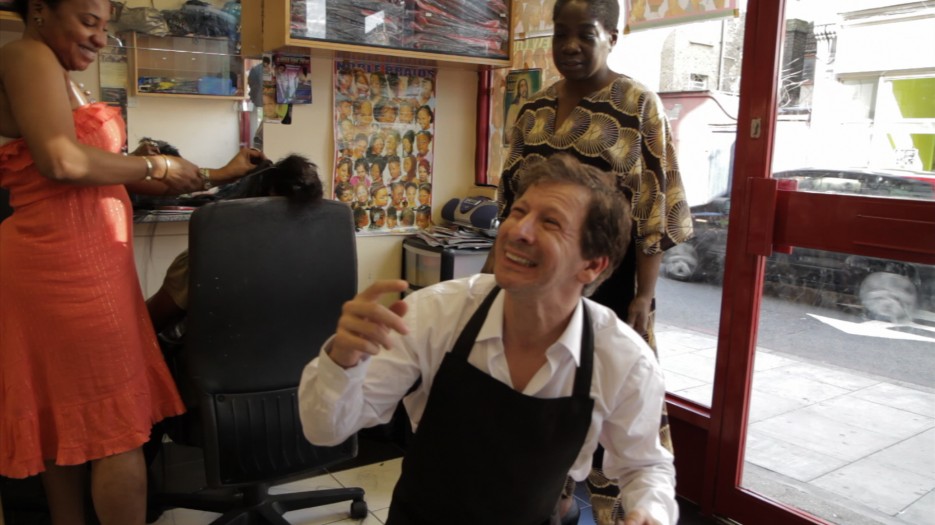 Early in the “Hairdresser ‘God First,’ Gossip Sequence” of Laure Prouvost’s The Wanderer (2013)—the piece now on view at Gallery TPW—the film’s main character Gregor (English actor Leigh Acton) argues with his mother (Ghanaian-born Justina Aseidu): “You’re growing up and the business needs you,” she says. “You have to learn every little thing about it.” “I don’t want to,” he shoots back, “I’m not your little boy any more.” He repeats, louder and more dramatically: “I’m not your little boy anymore!” The exchange is typical of the struggle between parents and their adolescent children. But the scene is not so typical. Gregor is an adult. He’s white, his mother is black, they have different accents, and the struggle is over how to braid hair in her London salon, God First. Even more, something seems wrong with the way both characters are speaking. Their words are out of sync with their mouths. Sounds land before lips move, speech and action are disconnected, and communication is disjointed. This off-kilter exchange between mother and son is emblematic of the “Gossip” chapter as a whole. Miscommunication and mistranslation are the engines that power the piece’s story and its structure.

The “Gossip” chapter is one section in a sprawling, multifaceted project called The Wanderer, which has included performances, short films, a series of linked installations and a feature-length motion picture. The project was inspired by a 2009 text by the artist Rory Macbeth, who translated Franz Kafka’s 1915 novella Die Verwandlung (The Metamorphosis) into English without a working knowledge of German, a dictionary, or the Internet.1 Instead, he attempted to identify words and build sentences around them. For example, the capitalized words Morgens (morning) and Träumen (dream) become place names in Macbeth’s version. Accordingly, where in Kafka’s tale, the protagonist Gregor Samsa wakes to find himself transformed into a giant vermin who is then shunned and locked in his room by his family; Macbeth’s translation sets Gregor on a physical and psychic journey across a war-torn countryside. He is beset by memories, joined for a time by a woman (perhaps his wife) named Betty, and accosted by a judge who is also his father. Macbeth and Prouvost collaborated on the script for Prouvost’s The Wanderer, but Prouvost’s approach to the production created opportunities for further metamorphosis in the piece’s transit from page to screen. This included working with her actors in a semi-improvisational style and moving the story into a series of contemporary, but disconnected locations—the God First beauty salon, a storage locker, a golf course, and a landmark estate. She often dropped her crew into these places without clearing them of people and directed her actors to engage with whomever was already on the scene.

In the “Gossip” chapter, this produces what Prouvost terms, “a series of clashes.”2 Acting styles clash against each other—Leigh Acton’s theatrics against Justina Aseidu’s understated naturalism and both against the backdrop of the salon’s workers and patrons. At one point toward the middle of the sequence Gregor drops to his knees in a melodramatic outburst of frustration. The salon’s customers erupt in giggles, and Acton himself appears to crack a smile. “Gregor,” teases one, “are you not well?” A young child playfully mimics the others. “Gregor,” he singsongs, while running through the salon. The dynamic between the text of the script and the everyday activities of the world around it generate the scene’s surrealism. At the same time, its improvisational, shifting tone continuously alters the way we, as viewers, understand the scene’s meaning. Is the conflict between mother and son comedic? Something to be laughed off? Or will this set off a more serious, and perhaps darker, chain of events?

This kind of slipperiness is an abiding characteristic of Prouvost’s work. In films like Owt (2007) and Hit Heat It (2010), she plays with the polysemic nature of language—written, spoken, and cinematic—setting words and images in different contexts to bring out new or double meanings. Prouvost, who was born in Lille, France, has suggested that as a French speaker living in London, she has became especially interested in these linguistic “opportunities.”3 Her works also render the familiar unfamiliar through similar contextual shifts. For the 2011 Frieze Art Fair, she produced a series of signs that she placed throughout the event grounds. These gestured toward the blandly functional nature of art fair signage but addressed attendees in an unexpectedly personal register. “It’s all happening behind this wall,” suggested one. “Ideally, behind this sign would be a hot spring with naked women swimming,” offered another.

Communication and its failure are the main themes around which the “Gossip” chapter is wound. The salon is awash in one particular form of communication—gossip. Hairdressers and customers swap stories about relatives and friends, joke, and pass judgment. For them, gossip is a form of information sharing, entertainment, and connection. Gregor’s mother also hopes to communicate the tricks of the trade to her son. Yet Gregor appears to be adrift in the conversations around him. While he talks, he can’t seem to communicate. As Prouvost suggests, “he’s lost in his own text.”4 He can’t translate it into something meaningful or comprehensible to those nearest him.

Prouvost draws her viewers into this theme through a set of intertitles that come up towards the end of the scene. Direct quotations from Macbeth’s book, these blocks of text suggest that we, like Gregor, might not comprehend all the chapter has offered: “Don’t believe that nothing happened…” the text advises:

It was verbose, this tale that was in places an undiluted offering, and in others the sluice gates fully turned, so that a running volume halted and left untold the main part about the ruck-sack, the family, the unlikely and tragic muse, or any of this warts-and-all last stand, that notwithstanding truth, had won this war.

Prouvost inserts these texts throughout The Wanderer. Each operates in a slightly different manner—as narration, as commentary, or simply another layer to the action on screen. Because we must read the text, Prouvost suggests that this also brings the viewer’s own voice—and back-story—into the narrative.5

Prouvost’s construction of the “Gossip” chapter not only invites us into the text of the film, but also heightens our awareness of the film as a motion picture. In addition to desynchronizing sound and image, she adds a laugh track, drawing connections between the chatter at God First and the gossipy talk shows that fill the daytime hours. In these programs, guests share personal stories, demonstrate housekeeping tips, and comment on the latest fashions, all to the responsive applause, laughter, and gasps of their studio audiences. Prouvost’s use of the laugh track here points to the common view that film, television, and other forms of moving image media are mediums of communication and connection.

Additionally, because the track is so obviously inserted, it serves to draw our attention to the fact that we are watching a film. This is a common tactic in Prouvost’s work. In the 2009 film Monolog, she directly addressed her audience and the space of the cinema itself by inviting viewers to smoke and pointing to (imagined) mice scurrying by the screen, half-hidden in the dark. In other sections of The Wanderer, characters speak directly to the audience, lamenting that they are only “on screen.” By calling attention to the conventions of the viewing situation itself, Prouvost also subtly hints at the conventions that guide all of our social interactions. In a 2012 interview with Rhizome, she pointed out “our reality is imagined, only constructed through rules of social norms.”6

Prouvost extends these ideas through the construction of the installation, which brings the set of God First into the gallery. Barber chairs, posters with hairstyles, shoes, goggles, and counterfeit designer bags fill the space. Monitors playing the “Gossip” chapter are interspersed throughout the set—paralleling the placement of television sets in so many beauty and hair salons. Viewers are invited to wait in the entry of the installation and bide their time with magazines, echoing the movements of God First’s patrons, and the everyday activities of their own lives. In its set up, the installation of the “Gossip” chapter also points out the ways fiction and the imagination—in the form of soap operas, gossip rags, fantasies about how much better our lives would be if only we purchased that one special item—already intermingle with our everyday lives. Prouvost hopes to make these boundaries a little looser, and to allow for more imaginative play through the possibilities of mistranslation and miscommunication. 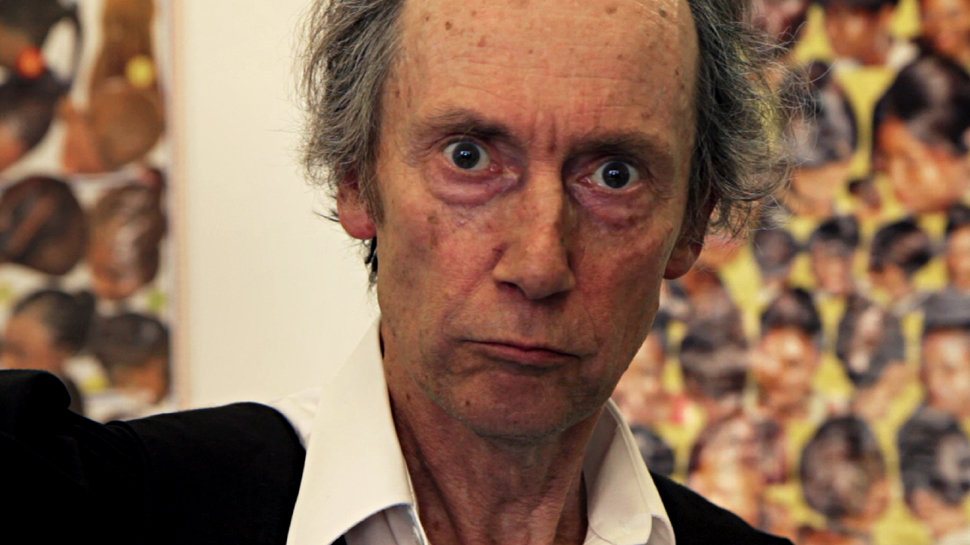 Gallery TPW and the Images Festival are pleased to co-present The Wanderer a newly commissioned video installation by French artist Laure Prouvost. Working from a mistranslation of Franz Kafka’s Metamorphosis, Prouvost creates a chaotic mise-en-scène, repeatedly subverting cinema’s narrative troupes, playing the archetypal against the absurd in a series of uncomfortable scenarios.

Amy Beste is a film scholar and curator living in Chicago. She is Director of Public Programming for the department of Film, Video, New Media and Animation at the School of the Art Institute of Chicago, where she curates the visiting artist and screening series “Conversations on the Edge” at the Gene Siskel Film Center. From 2000 to 2003 she served as Director of Programming for the Chicago Underground Film Festival. Beste has also organized moving-image exhibitions for a variety of institutions and organizations, including the Museum of Contemporary Art (Chicago); WTTW Channel 11 (Chicago); and Anthology Film Archives (New York), among others. She received her PhD from Northwestern University in 2012.