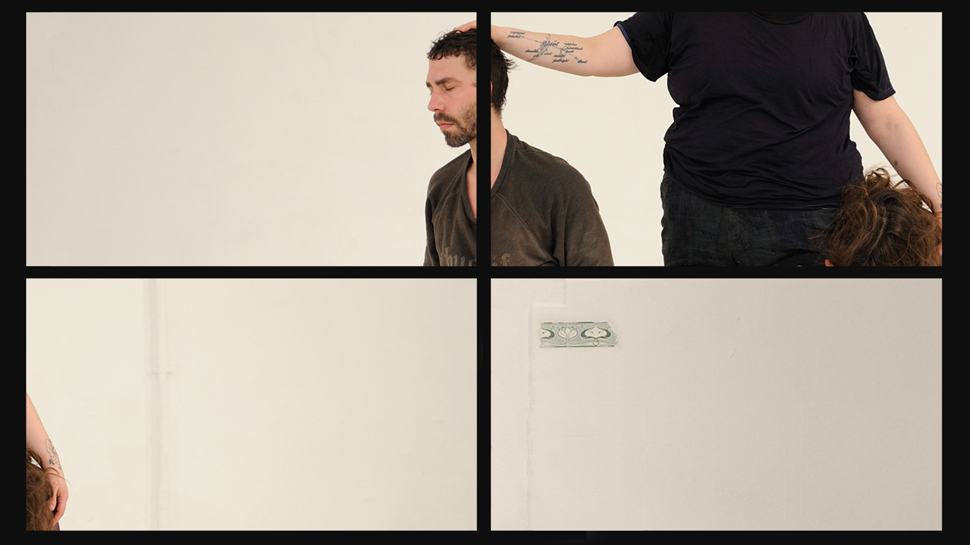 All My Holes Are Theirs & Eric Cazdyn’s Blindspot Machine

Saturday, January 23, 7pm
Performance of All My Holes Are Theirs
Screening with Eric Cazdyn and his Blindspot Machine

Throughout the month of January, writer and filmmaker Eric Cazdyn, artist Aleesa Cohene, and dancers/choreographers Jared Gradinger and Angela Schubot will work together in residence at Gallery TPW. Each brings a specific aspect of their practice to the collaboration. Aleesa Cohene, Jared Gradinger and Angela Schubot bring their 2013 trio all my holes are theirs to the table, an attempt by two performers to disappear through radical devotion to a third. Cazdyn brings his Blindspot Machine, a slow-panning multi-camera apparatus that renders a panorama — but one with blindspots. Cazdyn screens his films alongside live narration theorizing the potential of the blindspot. The residency brings together these two experiments in radical relation and looking to provoke questions about desire, death, performance, representation and spectatorship. The residency culminates with a public weekend of performance, video and discussion experiencing and reflecting on the relationship between liveness and images. Audiences are encouraged to attend both events as they are meant to be experienced in juxtaposition.

About the artists in residence:

Eric Cazdyn
Eric Cazdyn is a filmmaker and Distinguished Professor of Aesthetics and Politics at the University of Toronto. His research invariably revolves around the same problem: how the impossible (political, aesthetic, personal) is engaged…and how such engagements can enliven the world, effectively changing what is possible. Cazdyn translates this scholarly obsession into a film practice by foregrounding the problem of the blindspot, for which he has built a unique rig that is intended to make blindspots rather than to expose them. This “blindspot machine”—together with the real time, over-narrations that accompany the screenings—is a direct intervention into the operations and discourses of surveillance as well as into the desires invested in the image more generally. Cazdyn's films have been screened and performed in Japan, Taiwan, Canada, the US, the UK, and throughout Europe. He has also been engaged in a long-term music-video collaboration with Paris based musician, Eric Chenaux. Cazdyn has been a visiting professor at The University of California, Los Angeles, The University of Sao Paulo, Central European University, The University of Alberta, and Kings College (Halifax) as well as Artist in Residence at the Cube Cinema (Bristol) and, in January 2016, at Gallery TPW (Toronto). Cazdyn is a noted speaker and performer around the world and has written four books (on matters ranging over Japanese film, radical politics, illness and dying, psychoanalysis, and Buddhism).

Aleesa Cohene
Vancouver-born artist Aleesa Cohene (º1976) has been producing video installations since 2001. Her video works are derived from existing film footage, archiving and cataloguing thousands of film clips, which become the raw material for her work. Through strategic editing, montage, narration, and musical scoring, she shapes this familiar cultural content into new forms, contexts, characters, and relationships. While her earliest works took the form of single-channel videos drawn from North American film material from the 1970s and 1980s, her practice now encompasses a broader scope of film material (such as Continental European cinema and contemporary Hollywood movies) and operates primarily in multi-channel video installations. These installations are expansive, including non-video elements—such as wall paintings, texts, scents, sculptures, and dance works—that expand the materiality of the footage, directly referencing dialogue, images or objects that appear onscreen. Collaborations with fellow video artists and artists working in non-digital forms play an important role in my practice. Her work has shown in festivals and galleries across Canada as well as in Brazil, Cambodia, Germany, Latvia, Netherlands, Russia, Scandinavia, Turkey, and the United States. Recent solo exhibitions include I Know You Know (Oakville Galleries), Yes, Angel (Galerie Suvi Lehtinen, Berlin) and The Rest is Real (Vtape, Toronto); and group exhibitions Coming After (The Power Plant, Toronto) and Seemed Like A Good Idea At The Time (Or Gallery, Vancouver). In 2010 she completed a fellowship at the Kunsthochschule für Medien in Cologne, Germany mentored by artist/filmmaker Matthias Müller. She holds a Masters of Visual Studies from the University of Toronto. Cohene currently lives and works in Los Angeles, California.

Jared Gradinger and Angela Schubot
While internationally regarded as individual choreographers/dancers Jared Gradinger and Angela Schubot have also developed a collaboration of original and distinct movement language together over the past five years. With extreme physicality, radicality and simultaneous fragile intimacy, their works revolve around questions of co-existence and the notion of de-bordering the body. what they are instead of (2009) searches to exhaust the ‘I’ in order to make it disappear. is maybe (2011) goes further to produce a hybrid being, without identity, which emerges from the radical symbiosis of two bodies. Can I escape my self by finding a home in the other through an unconditional togetherness? The two-part project Les Petites Morts (2013) links back to this question, while adding a new dimension to the theme of the dissolution of the self. The first part, I hope you die soon, poses the question “how can we die together”? Is it even possible to conceive of this act as a last and final possibility of togetherness? The second part of this work is the trio all my holes are theirs, which was created together with Aleesa Cohene. In this work, both performers attempt to die and disappear by radically and mutually devoting themselves to another. In 2014 Gradinger/Schubot were invited by the Hebbel am Ufer to present the full cycle of their work. The occasion included a marathon day, which included lectures, rituals and the contribution of other artists circling around their interests and inspiration. As a final gift for the audience they created a new work soon you are theirs: a remix/sacrifice in collaboration with Dasniya Sommer and Leyland Kirby. Gradinger/Schubot teach workshops encouraging young artists to translate thinking into physical formulations as well as finding a practice that generates experience rather than only represent.

Francesco Gagliardi is a performance artist and occasional filmmaker based in Toronto.

Christine Shaw is the Director/Curator of Blackwood Gallery.

Bojana Stancic is an artist, performance designer and cultural programmer at The Art Gallery of Ontario.