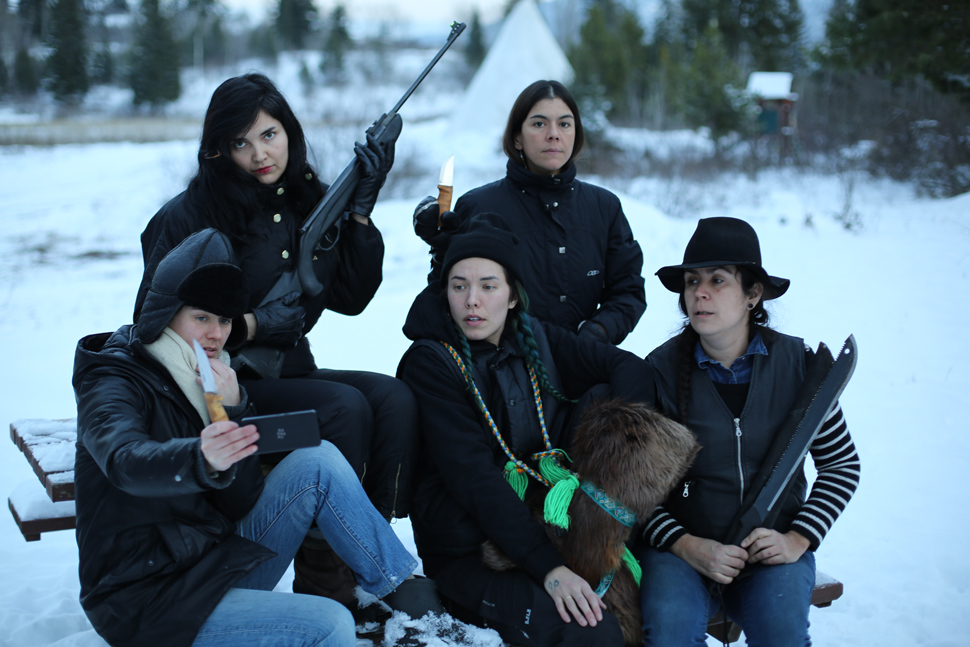 Emphasizing invisible labour and Indigenous-led economies, Coney Island Baby features a collaborative film project by Jeneen Frei Njootli, Gabrielle L’Hirondelle Hill, Chandra Melting Tallow and Tania Willard, with cinematographers Amy Kazymerchyk and Aaron Leon. Filmed during a December excursion to BUSH gallery on the territory of the Secwépemc Nation—in the interior of British Columbia—Coney Island Baby follows the artists as they learn how to snare wild rabbits. As they work towards a vital skillset often performed by women in Indigenous communities, the film questions what shared forms of sustenance can propose alternatives to capitalism. Situated at kitchen tables as much as snowy woodlands, the film also foregrounds the moments of care, play, and everyday relationality that remain essential to any economy.

Coney Island Baby is accompanied by a series of sculptural works by Frei Njootli, Hill, and Willard; works that are—as the artists explain—visiting TPW from the bush. With hollow sleeves and dangling ribbons, these works propose an expansive understanding of the agency and influence of their materials: animating the spaces that surround them and gesturing to their lives beyond the gallery.

Jeneen Frei Njootli is a Vuntut Gwich’in artist and a founding member of the ReMatriate Collective. In her interdisciplinary practice she uses media such as performance, sound and textiles. Much of her work deconstructs the history of the materials she uses. She investigates their relationship to trade, ceremonial regalia, and the politics of First Nations art. Her work as a contemporary Indigenous artist has been recognized throughout Canada. In 2017, Njootli was longlisted as a nominee for the national Sobey Art Award and shortlisted for the Contemporary Art Society Vancouver Artist Prize. In 2016 she won the William and Meredith Saunderson Prize for Emerging Artists. She has completed multiple residencies at the Banff Centre for the Arts, Banff, Alberta. For her recent Media Arts Residency at the Western Front, Vancouver, British Columbia, she hosted a free workshop teaching participants how to create and update Wikipedia pages for Indigenous women artists. In 2017, Jeneen Frei Njootli earned her MFA from University of British Columbia as an uninvited guest on unceded Musqueam, Squamish, Sto:lo and Tsleil-Waututh territories.

Gabrielle L’Hirondelle Hill is a Metis artist and writer from Vancouver, BC, located on unceded Musqueam, Sḵwx̱wú7mesh, and Tsleil-Waututh territory. Hill’s sculptures and installations perform as both a material exploration of colour and form and an enquiry into concepts of land, property, and economy. Her work has been exhibited at the Polygon Gallery, the Morris and Helen Belkin Gallery, Sunset Terrace, and Gallery Gachet in Vancouver; SBC galerie d’art contemporain in Montreal; STRIDE gallery in Calgary; SOMArts in San Francisco; and Get This! Gallery in Atlanta, Georgia.

Chandra Melting Tallow is an interdisciplinary artist, filmmaker, and musician of mixed ancestry from the Siksika Nation. Their practice often confronts the ghosts of intergenerational trauma and their relationship to the body, utilizing humour and surrealism to subvert oppressive structures of power. Recent work includes the 2017 film, soundtrack, and accompanying performance Rapture of Roses for Unsettling Colonial Gender Boundaries as part of Queer Arts Festival in Vancouver. In addition to composing the original score, they are a co-editor of Coney Island Baby.

Tania Willard (Secwepemc Nation) works within the shifting ideas of contemporary and traditional as it relates to cultural arts and production, often working with bodies of knowledge and skills that are conceptually linked to her interest in intersections between Aboriginal and other cultures. Willard has worked as a curator in residence with grunt gallery and Kamloops Art Gallery. Willard’s curatorial work includes Beat Nation: Art, Hip Hop, and Aboriginal Culture, a national touring exhibition first presented at Vancouver Art Gallery in 2011. Alongside Karen Duffek, she co-curated Unceded Territories: Lawrence Paul Yuxweluptun at the Museum of Anthropology. As a practicing artist, Willard’s recent project BUSH gallery collapses the boundary between artist and curator while creating space for experimental contemporary art practice in a land-based, outdoor environment outside of institutional spaces. BUSH gallery hosts an annual rez-idency on Willard’s family land on Neskonlith Indian reserve, near Chase, BC, part of Secwepemculecw.