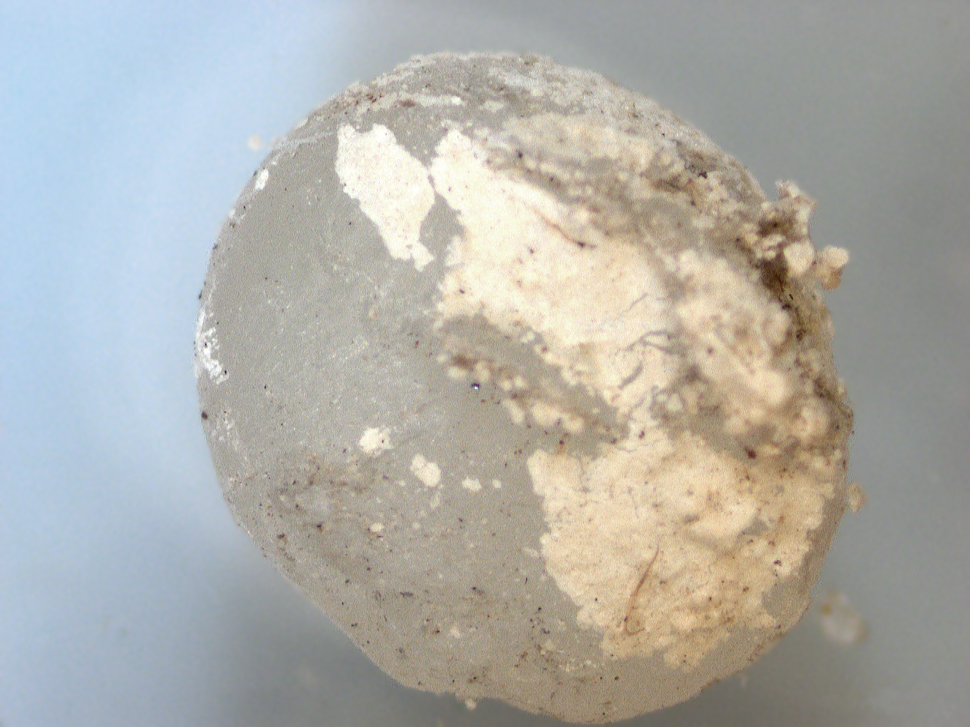 Featuring new video and wall works, Proof of Performances expands Kelly Jazvac’s work with the material refuse of capitalism. Thinking broadly about the effects of environmental contamination, the exhibition’s tendrils of inquiry touch on the granular, the bodily, and the interplanetary.

The exhibition begins with Jazvac’s extensive research into discarded plastics: the material realities they produce and the cultural dynamics they influence. Examining this pervasive material, Proof of Performances features a new video work titled Forward Contamination. The video depicts research scientist Anika Ballent painstakingly separating microplastics from a core sample sourced from the bottom of Lake Ontario. Against this abstract and at times celestial imagery, a soundtrack features two voice actors and a drummer performing an interview conducted by Jazvac with planetary geologist Catherine Neish. Struggling to be heard above the increasing intervention of the drum track, the dialogue considers NASA’s Planetary Protection Treaty, established in the 1960s to prevent humans from contaminating other planets.

Adjacent to this multilayered portrait of environmental harm, wall pieces made from salvaged vinyl signs rework fragments of the ubiquitous corporate white-male body of advertising material. Manipulated through Jazvac’s handiwork, these images of men take on new meaning through gestures of smocking and stitching. Alongside Forward Contamination, these works playfully nod to the underrepresented labour of women: as scientists, as crafters, as agents not pictured in the corporate-capitalist model.

Proof of Performances takes its title from the fields of advertising and corporate culture: mechanisms for assessing both an employee’s work and the effectiveness of an ad campaign. Repurposed for Jazvac’s work on plastics and labour, the phrase stretches outward to query how we demarcate and measure the visible—at levels both micro and macro—and the work undertaken to track its influence.

Kelly Jazvac is an artist who works with an interdisciplinary team of scientists, writers, and artists to research plastic pollution. Jazvac’s recent exhibitions include Sharp and Numb at the Art Gallery of Southwestern Manitoba, Brandon; Song of the Open Road at the Contemporary Art Gallery, Vancouver; Atmospheres of Form, Parisian Laundry, Montreal; and A Stratigraphic Fiction at The Berman Museum of Art, Collegeville, PA. Her work has been written about in e-flux Journal, Hyperallergic, C Magazine, The Huffington Post, Magenta Magazine, Border Crossings, Canadian Art, artforum.com, The New Yorker, and The Brooklyn Rail. She has upcoming exhibitions at Fierman Gallery, New York, and Or Gallery, Vancouver.