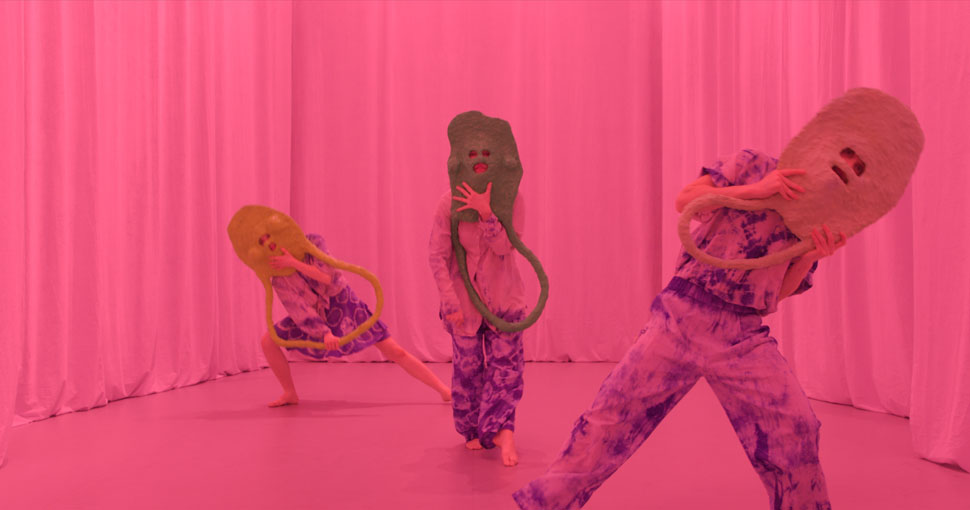 Presented as a choreographic mini-opera, Chloë Lum and Yannick Desranleau’s What Do Stones Smell Like in the Forest? stages a conversation about illness, pain, and what it means to become inanimate. Situated in environments of bright tones and ambiguous shapes, Lum and Desranleau’s performers engage with objects that serve as imperfect extensions of their bodies: things that both support them and weigh them down. Acting as a narrative of chronic illness, What Do Stones Smell Like in the Forest? is also a romance between body and object, a score for chorus and mezzo-soprano, an autofiction, a fantasy.

The sprawling two-channel video installation presented by this Montreal-based collaborative duo introduces a mournful, operatic golem. For Lum and Desranleau, the figure of Jewish folklore—an animated body molded from inanimate matter—stands as a counterpoint to the technologically-mediated figure of the cyborg. In the artists’ narrative, the golem is an ill body with limbs of unfired clay; stiff, inefficient, both human and thing. Joined by a chorus of sometimes-masked dancing figures, Lum and Desranleau’s golem considers the material, sensorial, and living conditions of its own in/animate state.

What Do Stones Smell Like in the Forest? is the second chapter in a series of works by Lum and Desranleau about the relationships between sentient bodies and objects. At Gallery TPW, their video opera is accompanied by a photographic and sculptural installation and a series of performative and discursive activations.