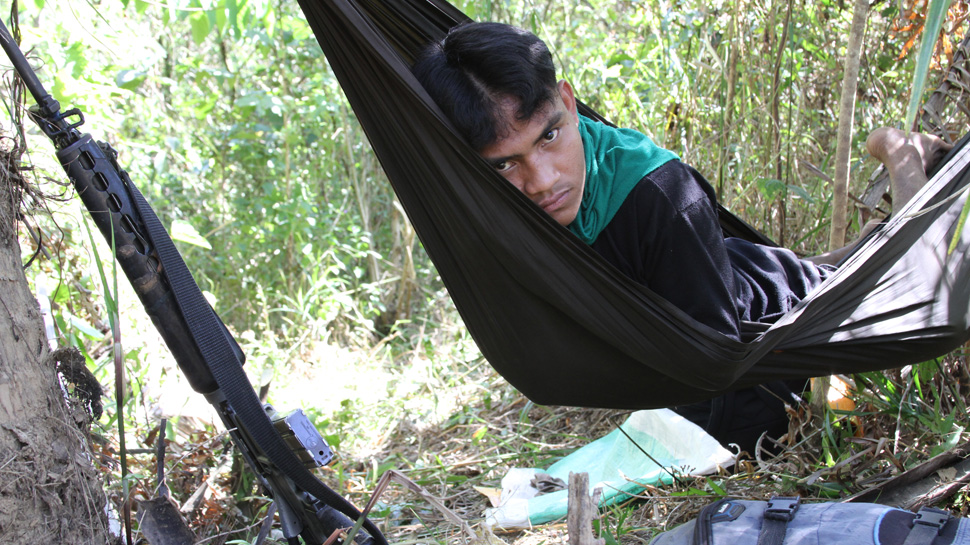 Images Festival and Gallery TPW are very pleased to co-present work by Mark Boulos. No Permanent Address is a three channel video portrait of the New People’s Army, a Maoist guerrilla group in the Philippines. Shot over several months while living amongst their members, the work speaks to the persistence of communist ideologies at a time in which Boulos suggests “capitalism has begun to lose its sense of inevitability.” Resisting the impulse found in most political documentary to focus on victims, Boulos looks at the members of the insurgent group as quotidian heroes as he records their daily activities and speaks with them about notions of love, sacrifice, revolution and ideology. Acknowledging the incongruities between a lived Marxism and the communist philosophies from which Boulos often draws inspiration, No Permanent Address is at once a generous, humanist portrait and a provocation about political violence and the transmission of ideas and culture across borders.

Mark Boulos is an American video-artist who lives and works in Amsterdam and London. He makes multi-screen documentary video installations, mostly about miracles and revolutions. He has filmed Marxist insurgents in the Philippines, oil guerillas in the Niger Delta, commodities traders in Chicago, Christian mystics in Syria, and Islamic jihadists in London and New York. MoMA will mount a solo exhibition of his work as part of their ʻProjectsʼ series in March 2012. He has had solo shows at the Miami Art Museum (2011), the Belkin Gallery in Vancouver (2010), Ar-Ge Kunst in Bolzano (2009), and the Stedelijk Museum in Amsterdam (2008). No Permanent Address was commissioned by and premiered at the Morris and Helen Belkin Art Gallery at the University of British Columbia in Vancouver in 2010. It was presented in Smart Project Space in Amsterdam in 2011, as it was long-listed for the Dutch Prix de Rome.