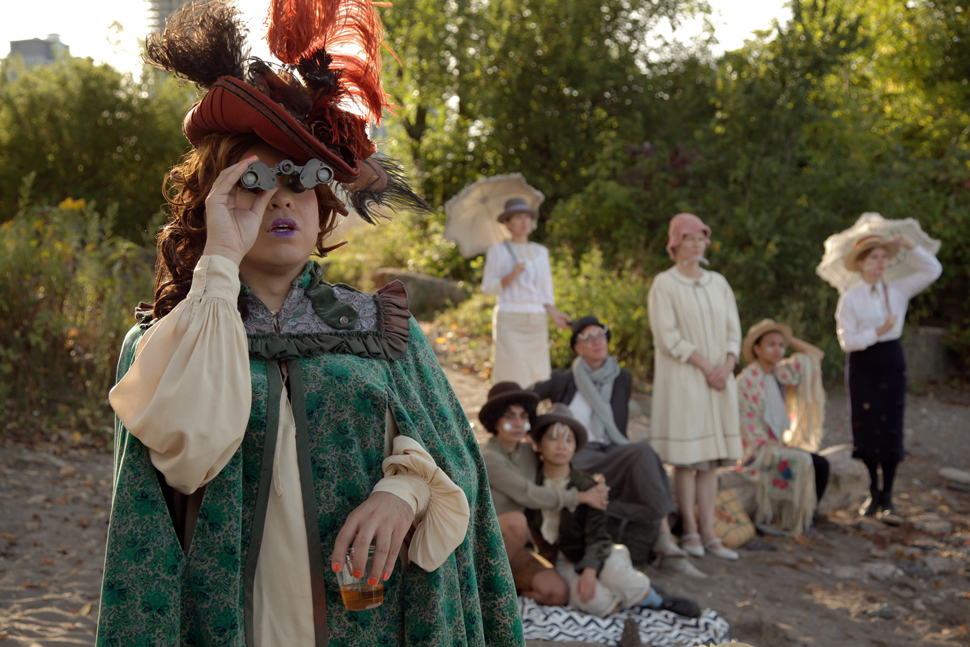 Isla Santa Maria 3D will screen every twenty minutes, starting on the hour.

The films of Toronto artist Oliver Husain consistently play with cinematic languages and visual codes. Drawing from theatre, dance, puppetry, and animation, with unique costume and set sensibilities, Husain employs his seductive tactics in ways that both absorb and shock viewers into an awareness of their role as spectators within the greater apparatus of film. With Isla Santa Maria 3D, Husain works with the relationship between the world of the spectator and the world on screen like never before, utilizing 3D technology for the first time in a new video installation. A complex experiment in the realm of science fiction, the work weaves histories of imperialism, current day myths, and visions of the future with the philosophical and technological devices of their representation.

The film takes as its starting point a myth about Isla Santa Maria, an island said to have formed from the wreckage of a replica of Christopher Columbus’ flagship, created for the 1893 World’s Columbian Expo in Chicago. In Isla Santa Maria 3D, a voice from the future delivers a brief about the life of the replica and its relation to a celebratory legacy of violent colonial conquest. Further expressed as a non-linear history, Husain’s film imagines the imperialist gesture as a moment upon which to project the reorientation of the past toward possible alternative futures.

Isla Santa Maria 3D stages a series of fantastical encounters that grapple with regimes of vision and the construction of knowledge. A conquistador moves through a choreographic sequence, dancing with a telescopic viewing device that helps to measure and understand the relationship of his body to the world. A group of visitors gather in an archive of shipwrecks. The figure of the eye becomes a puppet to control. Historical stereoscope images meet current day 3D cinema techniques, and audiences of Husain’s installation are cast as fanciful historiographers, their minds and bodies ordered and implicated to create the dimensionality of the scenes unfolding before them.

Working with a porous layering of historic moments, of fact and rumour, of replicas, ghosts, and holograms, Husain relates the political and perceptual narratives of colonialism to the technological developments of linear perspective, stereoscopic imaging, and the experience of 3D film itself, picturing both the figurative and literal overlapping of disparate viewpoints.

Oliver Husain is a filmmaker and artist based in Toronto. In 2015, his solo exhibition beside the point was shown at Susan Hobbs Gallery, Toronto; and his work was included in Architecture by Artists at 221a, Vancouver, Depth of Perception at Oakville Galleries and Magick Lantern Cycle at Halle für Kunst, Lüneburg. In 2016, Husain's work was featured in a group exhibition at the Justina M. Barnicke Gallery and a solo exhibition at Gallery Clages, Cologne. Later this year his work will be exhibited at The Galleria Mall, Toronto and The Western Front, Vancouver. His work is represented by Susan Hobbs Gallery, his website is www.husain.de