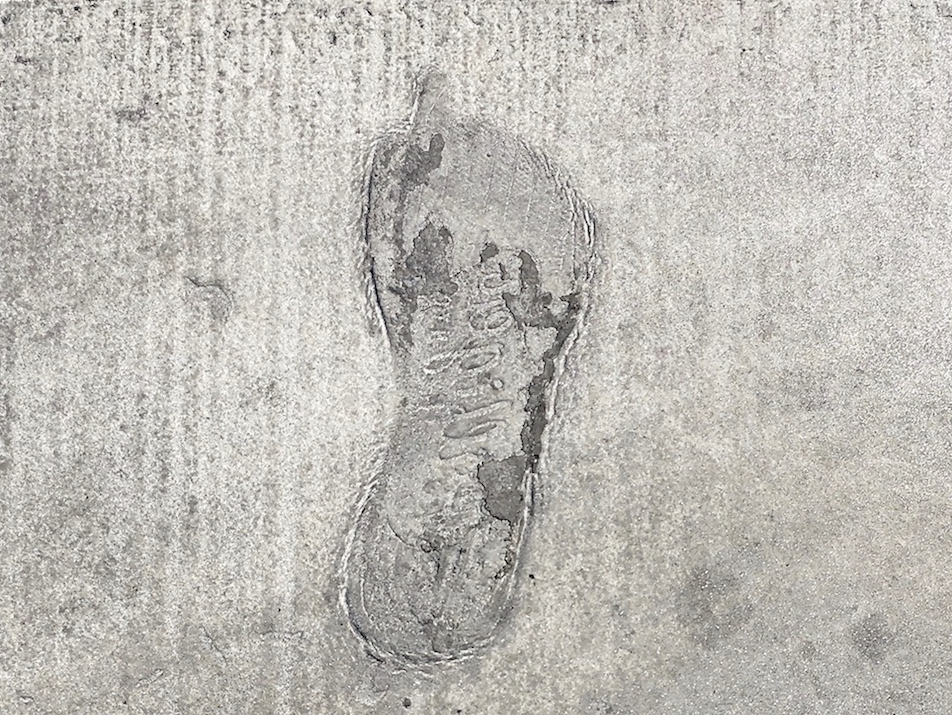 THE HOURGLASS CAN BE VIEWED HERE

The work consists of 60 photos with each image fading into the next for a duration of 60 seconds. One complete cycle lasts an hour and repeats on infinite loop.

The Hourglass offers itself exactly as its name indicates, as an hourglass—an online time piece in which images replace minutes/grains of sand. Unlike its physical namesake, this hourglass asks to be witnessed in order to work. Its trickle of images will pause when you click to another tab, resuming only when you return, such that your travels online might stretch an hour into hours, distending the clock.

Imaging traces of touch that result from movement through the city, The Hourglass trains our looking at the ground, lingering on photos of our cities’ most pedestrian concrete surfaces, which are comprised primarily of sand. The project looks closely and slowly at this sand—a material we connect deeply with time and the infinite—as we find ourselves inconceivably but demonstrably on the brink of exhausting this resource.[1]


[1] Ludacer, Rob. “The World Is Running out of Sand – and There’s a Black Market for It Now.” Business Insider, Business Insider, 11 June 2018, www.businessinsider.com/world-running-out-sand-resources-concrete-2018-6.

In March and April, but then also May, June, July and August, nearly every conversation I’ve had begins with a quip about the slipperiness of time. What is time? What is time ha ha? The question is posed rhetorically, but perhaps gets closest to answering itself in the questioning.

In this time, some of us, somewhat released or wholly prevented from the infinite loop of spinning time into gold (aka wage labour), have redirected it to labour in ways truly transformative. So, there is this enlivening new possibility of amorphous time, but there is also the formless time of illness unfolding within the unyielding bounds of late capitalism. In a passage about her experience of time while gravely ill a few years earlier, American poet Anne Boyer might also be writing about the right now being experienced by many:

“I’m sick in the inelastic present imperfect— the tense in which you have to pay the rent for all of eternity…. My time in the time of illness has been unmeasurable or ir-measured or a-measured. Yet despite how this time can no longer steadily or predictably submit itself to clocks and calendars, for survival’s sake I still have had to try to measure it.” [1]

From somewhere within this moment, I offer this time piece—its structural logic tied to the clock, so that you might use it as a strange technology to tell time, if you wanted or if you needed. An online infinite loop of 60 images, fading from one to the next so that each image plays for 60 seconds, it’s a kind of hourglass, but where the grains of sand are photos of shoe prints caught in surfaces made mostly of sand—sidewalk concrete.

In collecting these images, I think about something Dionne Brand wrote recently: “Time in the city is usually taken up running around positioning oneself around [a] narrative of ‘the normal,’” [2] an idea that “those in power keep invoking…as in ‘when we get back to normal.’ ” Brand continues, “But, I and many other people hate that normal. Who would one have to be to sit in that normal restfully, to mourn it, or to desire its continuance?” [3] In part, these prints evidence such a ‘normal,’ tracing one, bipedal version of running around the city. They don’t exhaustively catalogue or foreclose the possibilities of movement, and I desire intensely that they resist a return to the run around.

Brian Eno, “Golden Hours” (1975) “Sand is basically always a metaphor. It’s a metaphor for time. It’s a metaphor for infinity and unquantifiability,” opines poet Ariana Reines in an interview about her 2019 book, A Sand Book. She continues, “And, that’s weird because it means, in some ways, it’s like the background of an idea that we can’t really get clear on…. It’s like the negative space of reality. Something happening to us right now, something happening to us all the time somehow becomes the foreground.” A few minutes earlier Reines relayed how two thirds of the earth’s land mass is desertifying. Desertification wiped out the ancient civilization of Sumer, she tells, and it’s a cataclysmic situation today according to many climate scientists. [4]

The notion that so much land is becoming desert would seem at odds with Business Insider’s report that “the world is running out of sand.” [5] Scholar of architectural history and theory Mark Jarzombek offers some insight, writing in e-flux last year, “Architecture today is addicted to four basic products: steel, concrete, glass, and plastic. Each is a figure in the hyper-industrial world in which we live. We are living in the golden age of the Quadrivium Industrial Complex.” [6] Of these four products, sand is the primary component of two, concrete and glass (now the cheapest surface for cladding buildings). But, desert sand is unfit for these production purposes—it’s particles too round. Only the sand borne of thousands and thousands and thousands of years of rain pelting mountain rock, only the sand found at the bottom of river beds and oceans is usable in this golden age. [7]

During the winter I shared a physical iteration of this collection of shoe print images with Amish Morrell. He wondered if I’d heard of the 11 000-year-old footprints found in a layer of blue clay near Hanlan’s Point in Toronto? The ancient prints were discovered by crews constructing a waterworks tunnel in 1908 and promptly obliterated—covered over with concrete because of pressure to complete the job speedily. [8]

I started taking the photos several months after returning to Toronto, not knowing why. The shift back to the city was difficult. My body and brain fell back into well-worn routines of exhaustion, and awash in the blue-light of work emails, I felt unmoored, my capacity for thought stymied. I was being worked and working myself into the ground, but I’d started a job which had me sharing an office with Anthropologist Emily Hertzman whose presence and conversation was deeply vitalizing. She wondered if I lived high up in an apartment building? Her partner was ill at ease living in high-rises. He and generations of his ancestors had lived in a house that kept them rooted to the earth.

During that time, I would run, inevitably late, to a bus each morning, then a subway car then another to do my job until sundown before heading to a studio space nestled deeply downtown with a prominently displayed development proposal placard that threatened eviction at any moment. Somehow, within this untenable routine, I became attuned to the ground. The chance imprints of my fellow city perambulators preserved in sidewalk concrete or road paint appeared in the minutes between my work. Sometimes I walked past a print hundreds of times, invisible until the light was just right when it would suddenly materialize, arresting me in a moment of prosaic sublimity.

There’s a particular kind and time of day that’s best for print sighting. While a sun high in the sky will work, diffuse amber light at the end of the day is best; a slice of time photographers call golden hour. It’s also the name of one of my favourite Brian Eno songs, “Golden Hours,” which appears on an album that isn’t fully “ambient,” but feels on the cusp of it. Eno extended the concept of ambient from Erik Satie’s “furniture music”—music that doesn’t exactly need to be listened to. A background happening all the time, it “mingle[s] with the sound of the knives and forks at dinner.” [9]

To be clear, my moments of print-spotting rapture are ever so momentary. It’s mildly dangerous to stop abruptly on a busy city sidewalk or in the middle of an intersection to catch them, especially now. I’ve learned to keep moving until it’s safe to double back, and even then I need to take the picture quickly. I won’t get to consider it carefully until later. Then, as last winter began to wane, my print-seeking intensified; we lost the studio. With sand-brain intuition, I kept accumulating these indexes of touch cast under the shifting countenances of the sun. I wondered what they had to do with the ground really, with geological time; they seemed to share a specious likeness with the archeological. Like trace fossils, they preserve the movement of certain bodies, but they seemed counterfeit, somehow, in their relative contemporaneity. The concrete surfaces too fast.

“I like walking because it is slow, and I suspect that the mind, like the feet, works at about three miles an hour,” [10] writes Rebecca Solnit. Only now, on these newly decelerated walks has the temporal alchemy beneath me, the conundrum of timescales, the exquisiteness of sand that is everywhere—its non-metaphorical infinitude profaned—become thinkable.

*The epilogue was originally written to accompany a digital photo series for The Tulip.