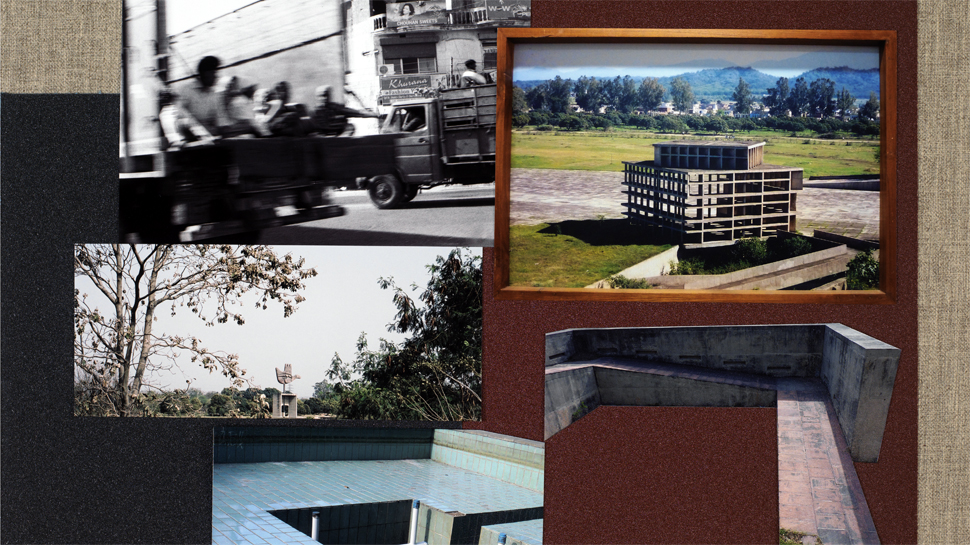 Tris Vonna-Michell stages installations and performs narrative structures using spoken word, sound compositions, and photography. His narratives are born of historical research and social observation, filtered through personal anecdotes. Vonna-Michell’s works extend over several years as context-specific iterations develop with each exhibition, acknowledging how the perception of historical material is affected by the conditions of the present.

Capitol Complex (2014) evolves around a manuscript consisting of four acts based on four characters, which serves as an underlying blueprint for the work. The story is led by Traveller, who extends his leisurely strolls of the Indian city of Chandigarh into the night in order to experience its unique urban architecture with greater intensity and anxiety. After his nocturnal explorations, he grows weary and changes his course from architectural appreciation to searching for crevices and enclosures. Urban fixtures of obstruction, surveillance, and derailment direct his passages, until a shift in perception occurs.

Tris Vonna-Michell stages installations and performs narrative structures, using spoken word, sound compositions and photography. The narratives he relates pan between historical events and personal anecdotes which are reinvented through their disparate associations. Vonna-Michell's works are context-specific and extend over years. Layering and renegotiating the inherent formal, material and narrative structures he performs what he terms a "narrative of form" in which multiple facets defy conventions and retain their elusive qualities.

Tris Vonna-Michell (1982, Rochford, UK) is based in Stockholm, but currently in residence at the Darling Foundry in Montreal. He studied at the Glasgow School of Art as well as the Städelschule in Frankfurt am Main. His work has recently been featured in several international institutions including VOX, Montreal, Centre George Pompidou, Paris (2014); MUSAC in León, Secession, Vienna and Mudam, Luxembourg (2013); the 9th Shanghai Biennale, the Moderna Museet, Stockholm, and the San Francisco Museum of Modern Art (2012); WIELS, Centre d'art contemporain, Brussels, the Hayward Gallery, London and the CCA, Glasgow (2011). His works are in the permanent collections of the Tate Modern, London, the Hamburger Kunsthalle, Hamburg, the San Francisco Museum of Modern Art, and Centre national des arts plastiques, Paris, among other institutions. He is represented by Jan Mot in Brussels and Mexico City, Metro Pictures in New York City, T293 in Rome and Overduin and Kite in Los Angeles. Vonna-Michell is shortlisted for the 2014 Turner Prize.