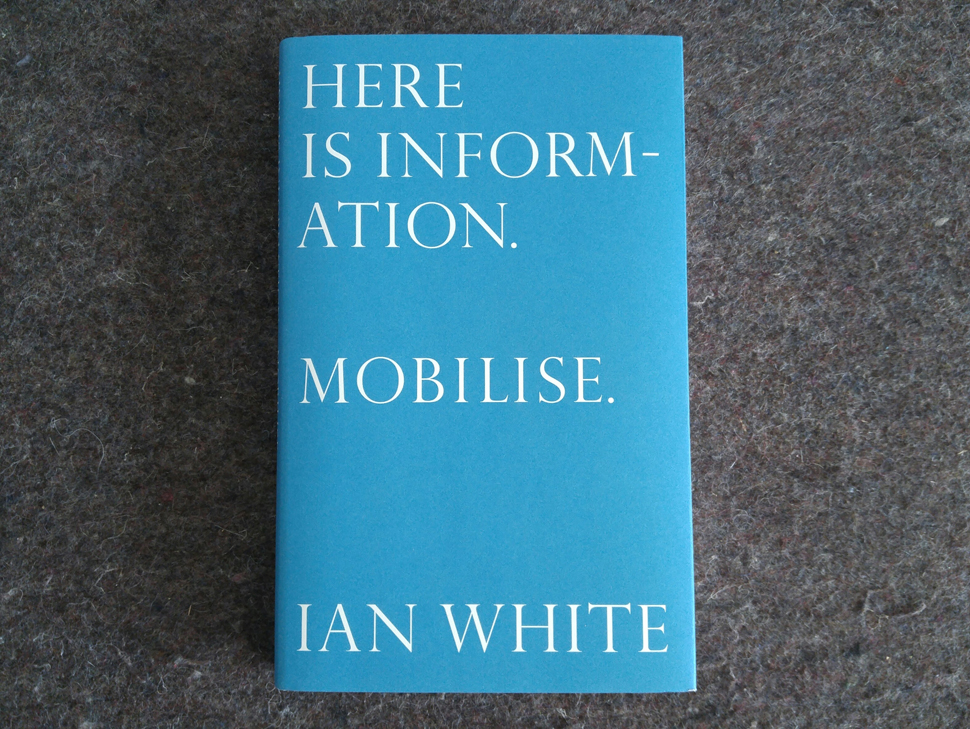 UPDATE: Due to unforeseen circumstances, Emma Hedditch is unable to fly to Toronto to join us for the workshop. We are currently investigating ways to have her participate remotely.
Jacob Korczynski will be present and will lead the workshop. Please email daniella@gallerytpw.ca to reserve a space.

“By the time of his death in 2013, Ian White had influenced a generation of artists working with the moving image. Through his artistic and curatorial practice over the course of almost two decades, White developed a constellation of concepts around ‘cinema’ – understood less as a physical space, or a particular canon of films, but rather as a set of social practices open to radical possibilities.” – Mike Sperlinger

Edited by Mike Sperlinger and published by LUX, Here is Information. Mobilise collects the published texts of artist and curator Ian White for the first time. Whether reflecting upon the work of artists such as Isa Genzken, Oliver Husain, Sharon Lockhart, Yvonne Rainer, and David Wojnarowicz or incisively drafting a critique of power that addresses conditions of collective reception in the cinema and the political possibilities in the present-tense of performance, White’s writing is as incendiary as it is insightful. It is also inextricable from his own practice as an artist, which unfolded largely through performances presented at venues including Chisenhale Gallery, Tate Modern, and here in Toronto at the Images Festival.

Adjacent to the moving images of Gallery TPW’s current exhibition Does the oyster sleep?, Emma Hedditch, one of Ian White’s long-term collaborators, will join Jacob Korczynski and participants in a collective reading and discussion of White’s text Palace Calls Crisis Summit (2003). Acting as a report that encompasses two consecutive editions of the International Short Film Festival Oberhausen, Palace Calls Crisis Summit pulls at the separation between the isolated exhibition site and the urgencies of the world beyond, forcefully situating his own body (and our bodies in turn) as the interface between the two.

The workshop (with advance registration required) will conclude with a collaborative writing exercise, followed by a public launch of Here Is Information. Mobilise during which copies of the book will be available for purchase.

To register for the workshop, please email Daniella Sanader at daniella@gallerytpw.ca.

Emma Hedditch (born 1972, UK) is an artist and writer living in New York. Her work focuses on daily practice, materiality, and distribution of knowledge as political action. She often works collaboratively with other artists and groups, for example The Copenhagen Free University (2001–2008) and Cinenova, a feminist film and video distributor (1999–present). Heavily influenced by politicized conceptual art practices and feminist politics, her work has taken on flexible forms as performances, collectively produced films, fanzines, as well as workshops, screenings, and events.‬
‬
‪Jacob Korczynski is an independent curator based in Toronto and the editor of Andrew James Paterson’s Collection/Correction (Kunstverein Toronto & Mousse Publishing). He has curated projects for the Stedelijk Museum, Oakville Galleries, If I Can’t Dance, I Don’t Want to Be Part of Your Revolution, SAVAC and the Badischer Kunstverein and his writing has been published by art-agenda, C Magazine, Flash Art, Girls Like Us and Little Joe.