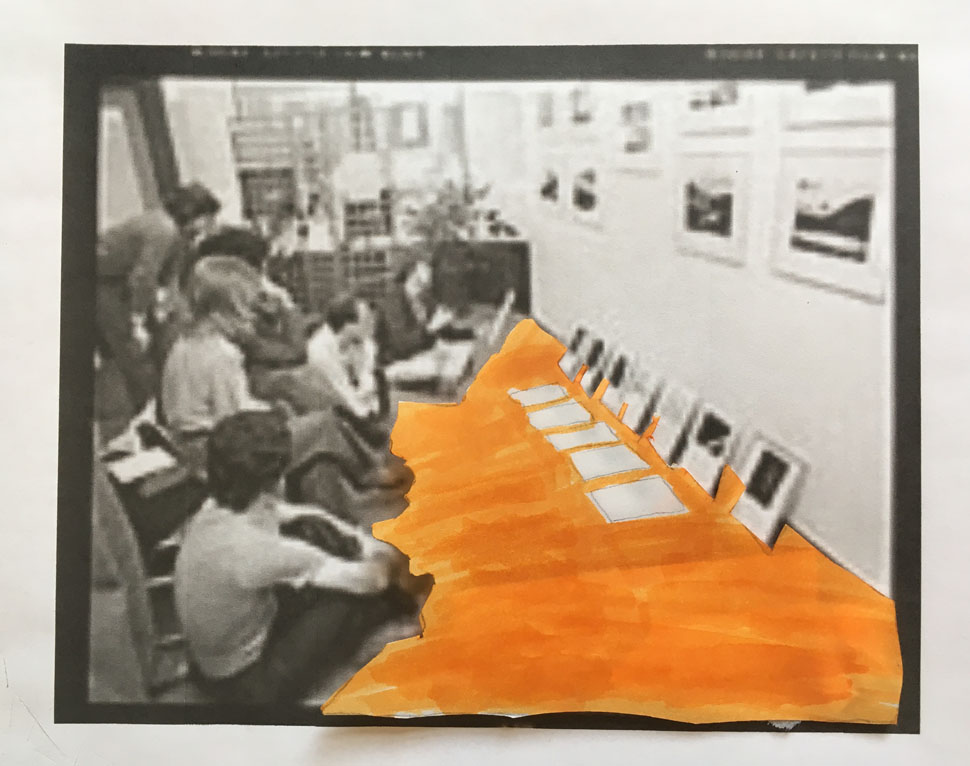 About the exhibition:
Positioning the image as an encounter between performer and audience, Visiting Hours presents new work by Montreal-based artist and choreographer k.g. Guttman. A live exhibition hosted by an ensemble of performers, visitors are guided in relational and embodied observation techniques with images pulled from the practices of six Toronto-affiliated artists.

Guttman’s Visiting Hours is the first in a series of annual summer residencies at Gallery TPW, featuring artist-led explorations into how forms of spectatorship are produced in and with a public.

k.g. Guttman is a Montreal-based choreographer, artist, educator, mother, and research candidate in the PhDArts program of Leiden University and the Royal Academy of Art in the Hague, the Netherlands. Her work, funded through Stichting de Zaaier and the Social Sciences and Humanities Research Council of Canada, considers how territoriality and choreography are intertwined in site-situated practices.
Recent performances and exhibitions have been hosted by Blackwood Gallery, Toronto, Dazibao and VIVA! Art action, Montreal, Musée d’Art de Joliette, Quebec, Visualeyez International Performance Art Festival, Edmonton, Klupko, Amsterdam, and Palais de Tokyo, Paris. Her choreographic residencies and commissions include the Canada Dance Festival, Dancemakers, Toronto, LeGroupe Dance Lab, Ottawa, the University of Sonora, Mexico, Buda Kustencentrum, Kortijk and Pointe Ephémère, Paris.
From 2008-2013, Guttman was Assistant Professor in the Department of Contemporary Dance, Concordia University, Montreal. Guttman’s teaching practice include the dance LOVE-IN, Toronto, and the Royal Academy of Art in the Hague, the Netherlands.

Ahlam Hassan is a performer, director, educator and architect in training. She recently completed a thesis titled "Locating and Naming African-Canadian Performance" for which she analyzed the representation of Blackness in theoretical drama courses in Toronto before creating a new syllabus to teach African-Canadian performance history to students at the post-secondary level. This September you can catch Ahlam expanding her working intersecting art and education at the Toronto Palestine Film Festival.

Johanna Householder works at the intersection of popular and unpopular culture in video, performance art and choreography. Her interest in how ideas move through bodies has led her often collaborative practice, and inform her research and writing on the impact that performance has in contemporary art and new media. She has recently performed at VIVA! in Montréal, Performancear o Morir in Norogachi, Mexico, and the Independent Artists Research Centre (IARC) in Singapore. She is one of the founders of the 7a*11d International Festival of Performance Art, and she co-chairs the Artistic Research Working Group of Performance Studies international. She has taught performance art and new media at OCAD University since the early 90s, where she is a Professor in the Faculty of Art and Graduate Studies, and currently Chair of Cross-Disciplinary Art Practices.

Kelly Keenan is a Montreal-based dance artist and teacher. Her fascination of the perceptive capacity of the body is reflected in both her teaching and artistic work. Kelly’s choreography creatively grapples with the contradiction that dance, as a kinaesthetic practice, is generally performed for the spectator and accessed through the visual sense. Through hybrid forms, she inquires into ways to enfold the felt experience of dance practice into performance. Examples include A Practice (2013), a performance/workshop in collaboration with Adam Kinner; Be Still and Know Me (2017), a performance/lecture; and most recently The Direction of Ease (2018), a performance/massage in collaboration with Jacinte Armstrong, Elise Vanderbourght and Lois Brown. Kelly is currently pursuing an MA in Concordia’s Individualized program at the hinge of Dance Studies, Art Education and Anthropology.

Mikiki is a performance and video artist and queer community health activist of Acadian/Mi’kmaq and Irish descent from Newfoundland. Their work has been shown in Artist-Run Centres, Public Galleries, Performance Festivals and self-produced interventions throughout Canada. Mikiki has worked across the country as a Sexuality Educator in public schools, a Bathhouse Attendant, a Drag Queen Karaoke Hostess, a Gay Men's Health & Wellness Outreach Worker, a Harm Reduction Street Outreach Worker and an HIV tester. Mikiki currently lives in Toronto.

Shahir Omar-Qrishnaswamy is a multi-disciplinary artist and wisdom-seeking nomad. In 2017-2018, they worked as an art therapist leading meditation, dance, and singing workshops for newly arrived refugee youth in Montreal. In this life, Shahir is a diasporic, queer trans person of South Asian descent who grew up between Mississauga and Malawi. They have an honours degree in Film and Cultural Studies from McGill University. Their creative philosophies are rooted in the Dhamma (Vipassana meditation), animism, and compassionate eco-social justice.

Bee Pallomina is a dance artist who makes work for stage, installation, film/video and puppets. Her practice includes movement, care, and the everyday. She is an artist, educator, and mom.