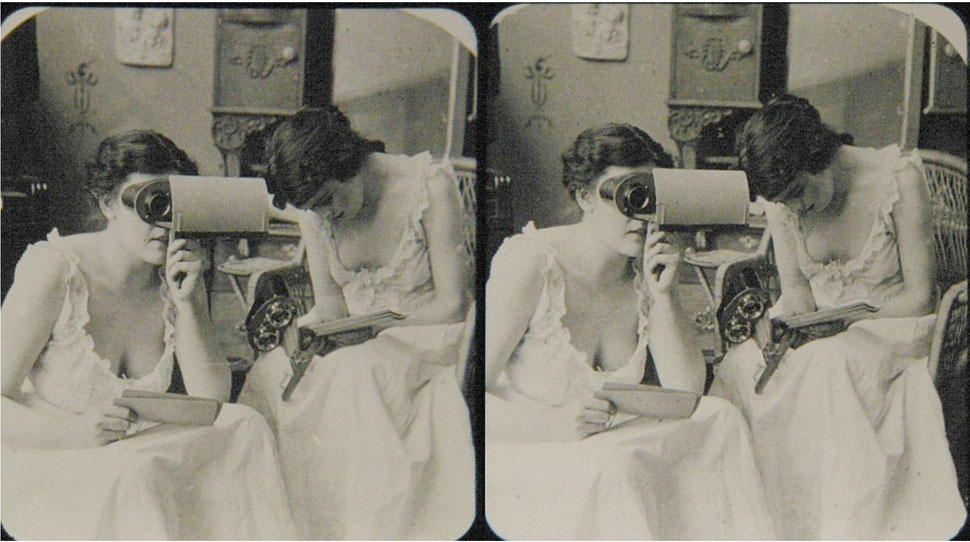 
When Melania was busted for stealing Michelle’s words during her disastrous speech at the Republican Convention, vloggers leapt into action, and within hours, side-by-side sterescopic duets of the two speeches were trending on Youtube. It’s a new and now ubiquitous form of split-screen schadenfreude, when anyone ventures to claim someone else’s song as their own. Melania and Michelle, taking the ‘ok’ out of karaoke. M ‘n M, putting the ‘copy’ back in stereoscopy.

The eerie fascinations of cinematic mimicry—from Gus Van Sant’s shot-for-shot remake of Psycho and Chase Joynt/Nina Arsenault’s redo of Colin Campbell’s True/False, to the crowd-sourced shot-for-shot remake of Chris Marker’s Sans Soleil, currently in progress—exploit and explore the same-yet-different vibrations of side-by-side stereoscopy frames. These hybrid doppelgangers (with or without permission, in or out of sympathy, as sincere tribute or ironic treachery) proliferate exponentially in our digital moment, and with them, their poetic and political contradictions and implications expand and demand accordingly. What does it mean to perform a cover version of someone else’s film? How does the new version stereoscopically agitate in relation to the original? How do traditions of satire and agit-prop navigate the uncanniness of split-screen? What does side-by-side remake culture do to the verités of doc practice?

World Records is an exploration of what documentary is, with an eye toward what it might become.

Published by UnionDocs Center for Documentary Art, World Records brings together the voices of scholars, critics, makers, and curators who offer new and complex perspectives on documentary to challenge and extend its margins. Published semi-annually, individual peer-reviewed volumes are organized around broad yet well-defined themes that engage the intellectual, technical, and formal strategies that are at the heart of an engaged contemporary nonfiction media practice, as well as the cultures that frame it.