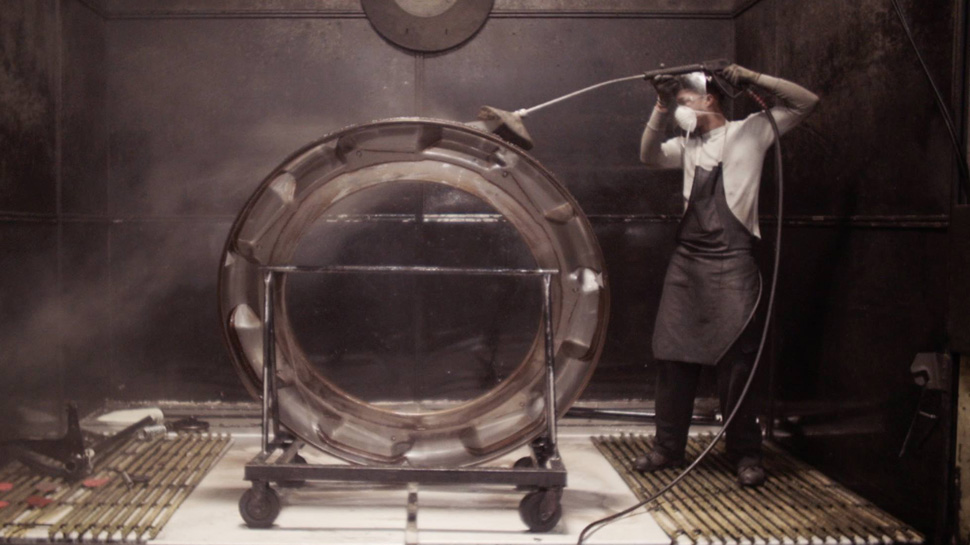 In March 2014 Everson and his crew spent 3 days shooting in a Mechanicsville Virginia factory that produces all the components needed to build bowling alleys. The resulting work consists of a full shift – eight hours – worth of documentation of the numerous different tasks performed by the staff of the facility. Everson initially selected 35 of the hundreds of workers to record and pared that number down to about a dozen in the final cut. The extended duration of Park Lanes allows us the time to pay close attention to each of his subjects as they work, creating extended portraits of the heterogeneous staff.

The factory assembles a wide variety of parts, from small motors and moving components to the lanes themselves. Over the course of the eight hours our attention is held by the diverse activities and the focused expertise of the workers. Framed by Everson’s signature hand held camera, the physicality of the cinematography adds another layer of labour to the piece, while the sundry components reveal their sculptural qualities in this singularly ambitious and elegant work.

Kevin Jerome Everson was born and raised in Mansfield, Ohio. He has a MFA from Ohio University and a BFA from the University of Akron and is currently a Professor of Art at the University of Virginia, Charlottesville. His artwork—paintings, sculptures, photographs–and films, including six features (Spicebush, 2005; Cinnamon, 2006; The Golden Age of Fish, 2008; Erie, 2010; Quality Control, 2011 and the recently completed The Island of St. Matthews, 2013) and over ninety short form works, have been exhibited internationally at festivals, museums, cinemas and galleries. His films Emergency Needs and Quality Control were included in the 2008 and 2012 Whitney Biennials. A solo exhibition of his short films,More Than That: The Films of Kevin Jerome Everson was held at the Whitney in 2011. He has been the subject of career retrospectives at the Centre Pompidou, Paris and Visions du Reel, Nyon.  He is the recipient of the 2012 Alpert Award in the Arts for Film/Video. www.keverson.net