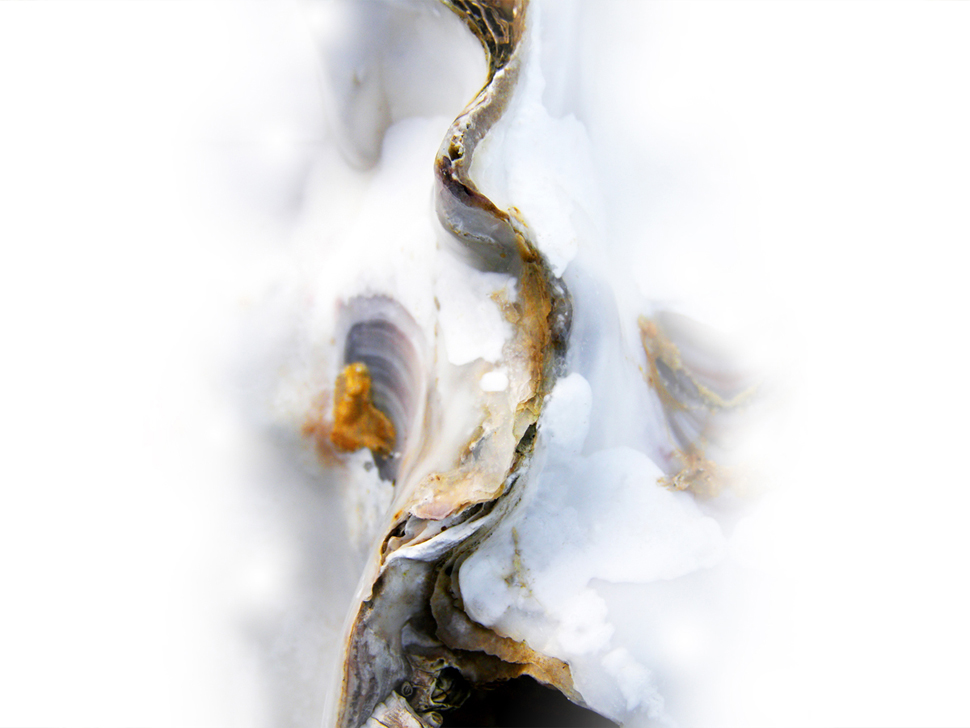 Does the oyster sleep?

Does the oyster sleep? explores the relationship between love and politics—two realms of human experience often understood as antagonistic to one another. The exhibition rewrites the seeming conflict between shared interest and individual desire, imagining how they can be linked through a common longing to live differently in the world. Including film and video work by Sophie Bissonnette / Martin Duckworth / Joyce Rock, Marguerite Duras, Maja Borg, Sara Eliassen, Silvia Gruner, and Waël Noureddine, Does the oyster sleep? addresses the forms of care and labour we enact for each other.

The exhibition takes its title from a passage in Brazilian writer Clarice Lispector’s 1973 novel Água Viva, in which the author describes the contortions of an oyster under drips of lemon juice. Just as the oyster is torn from its root, becoming exposed and vulnerable, can love tear us away from ourselves, toward others, or toward new relationships based on care, solidarity, and communal autonomy?

Using Lispector’s visceral image as a starting point, the exhibition imagines how this radical vulnerability can redirect our attention away from Modernist frameworks for human relationships. Featuring several long-form documentary and experimental works, and accompanied by a library of related poetry, fiction and non-fiction, Does the oyster sleep? welcomes sustained watching, reading, and thinking together.

Does the oyster sleep? was originally presented at SBC Gallery of Contemporary Art, Montreal, in 2016.

Sophie Bissonnette has over 35 years of experience directing and screenwriting documentaries, many of which have won awards. Une Histoire de femmes (1980, codirected with Martin Duckworth and Joyce Rock) was awarded by the Association of Quebec Film Critics as the Best Feature Film of the Year. Since then, her career as an independent documentary filmmaker has shown her interest in women's lives, history, the labour world and social justice. Des Lumières dans la grande noirceur (1991) - which won three awards - is a portrait of the trade union and feminist activist Léa Roback. Partition pour voix de femmes (2001) was finalist at the Prix Gémeaux for Best Documentary. Sexy inc. Nos enfants sous influence (2007) won the UNICEF Prize at the Japan Prize. More recently, Sophie Bissonnette created web documentaries: Les Dames du DOC (2016), La Ligne du temps de l’histoire des femmes (2015). She is the founder of Productions Contre-jour and Productions mainslibres.

Maja Borg was born in Norrköping, Sweden. She is an artist and film director working on films and art projects around the world. Her continued work about the world economy and global politics keeps putting Borg at the forefront of debates around human rights issues in different forums. Borg’s To She in Me (2005) was selected for the Culture Bound 7, East Wing Collection at the Courtauld Institute, London. Future My Love (2008) was premiered at the Edinburgh International Film Festival in 2012 and nominated for the Michael Powell award in 2014. Borg was selected as one of the “visionaries” of Dazed and Confused’s magazine’s online platform where she premiered her experimental short film We the Others (2014).

Martin Duckworth, a politically engaged director and cameraman, is the author of a large and significant body of work dealing with issues of peace and justice such as Temiscaming, Québec (1976), Une histoire de femmes (co-directors: Sophie Bissonnette and Joyce Rock, 1980), Plus jamais d’Hibakusha! (1984), On l’appelait Cambodge (1982), Retour à Dresden (1986), Oliver Jones in Africa (1990) and Acting Blind (2006).

Marguerite Duras was born in Gia Dinh, near Saigon in French Indochina (1914–1996). She was a novelist, essayist, scriptwriter, playwright and experimental filmmaker. Best known for having penned the screenplay for Alain Resnais’s Hiroshima Mon Amour (1959), she received a nomination for Best Original Screenplay at the Academy Awards. As a filmmaker, her work impacted the burgeoning Nouvelle Vague in the late ‘50s and ‘60s through her experimentation with nonlinear plans and elliptical editing. Her films set the basis for the disjunction of sound and image through the radical use of voiceover.

Sara Eliassen is an artist and filmmaker based in Oslo and New York. Her work is a conceptual cinema practice, investigating how aesthetics and narratives presented in the moving image create collective memories and how these influence the understanding of our selves as subjects. Elliassen’s work plays with media and narrative expectations, creating projects in public spaces: Not Worth It (2006) consisted of false TV-ads that interfered with Norwegian TV-channels. Her films Still Birds (2009) and A Blank Slate (2013) have been presented at the Venice Film Festival, International Film Festival Rotterdam and Sundance, amongst others.

Silvia Gruner was born in 1959 in Mexico City, where she lives and works. In her installations she combines sculpture, photography, video and film. Gruner’s work plays with juxtapositions of elements of indigenous Mexican culture which can be translated into a diversity of contemporary materials. Some of her pieces question the bias on the female body, while others examine Gruner’s artistic heritage. Her work has been exhibited at the Americas Society, New York (2016); the Museo de San Ildefonso, Mexico City (2016); the Cisneros Fontanals Foundation, Miami (2015); among others. Un Chant d'amour is both a film produced in 2005 presented in this exhibition and a publication edited by RM, México-Barcelona in 2009.

Waël Noureddine is a writer, poet and filmmaker born in Lebanon in 1978. He has spent most of his life moving from one city to another. He began his professional career as a journalist and has studied History of Art at La Sorbonne. His films describe, in literary and critical terms, real-life situations, trying to capture the physical and mental scars of conflict, resisting subjugation and submission. Next to his main activity as a filmmaker, he has a great interest in learning languages and theories of linguistics, philosophy, religions, and the history of Islam. He spent a few years playing bass and singing in a soft punk music band in France before returning to filmmaking and shooting Boombs, a film about a religious-nihilist terrorist group. He has also presented painting exhibitions in New York. After he moved to Sweden as a “love refugee,” he discovered a healthy way of living.

Joyce Rock returned to Montreal in 2011 after 13 years in Vancouver's Downtown Eastside (DTES) where she co-founded the DTES Neighbourhood House of which she was Executive Director from 2005 to 2011. Using the Right to Food to mobilize their neighbours, the organization was active on all social justice fronts. In 2011, she was awarded the 3M Health Nexus Leadership Award for advancing the Social Determinants of health. “I became disenchanted with filmmaking while working in an Indigenous community which was literally invaded by every conceivable type of recording device. With rare exception, they prioritized their recordings at the expense of those they were filming. Since then, I use instead the tools of Community Development to engage my passions: the Rights of all those working in the sex industry, the Rights of prisoners and the logic of Supervised Injection Sites. I trust and invest in it because Community Development is the natural 'home' of all of us who have never belonged or who have had our belonging ripped from us.”

Irmgard Emmelhainz is an independent translator, writer and researcher based in Mexico City. In 2012, she published a collection of essays about art, culture, cinema and geopolitics, Alotropías en la trinchera evanescente: estética y geopolítica en la era de la guerra total (BUAP). Her work on film, the Palestine Question, art, culture and neoliberalism has been translated to German, Italian, Norwegian, French, English, Arabic, Turkish, Hebrew and Serbian, and has been presented at an array of international venues, including the Harvard Graduate School of Design in Cambridge, Massachusetts (2014), the March Meeting at Sharjah Art Foundation and the Benjamin in Palestine conference in Ramallah (2015). She is member of the editorial board of Scapegoat Journal, and her book The Tyranny of Common Sense: Mexico’s Neoliberal Conversion was published in March 2016.

Pip Day is Director/Curator at SBC Gallery of Contemporary Art in Montréal where she has curated numerous events and exhibitions over the past five years. Prior to coming to Montréal, Pip worked as an independent curator, writer and educator in the arts primarily in Mexico City, New York and London. In 2003 she founded teratoma, the first graduate level curatorial studies program in Latin America and RIM, an international residency program for curators, artists and critics in Mexico City. There she also established el instituto, an organization dedicated to culture, politics, activism and research, which generated exhibitions and events such as Spatial Practices in Revolution and Talk Show. This work was partly supported through Pip’s Andy Warhol Foundation Curatorial Research Fellowship, which she received in 2011. In the late 90s she worked as Curator at Artists Space in New York.
More recently, Pip was a member of the curatorial team for the SITElines biennial 2016 in Santa Fe.
Pip has published numerous texts on art and culture, has taught in curatorial Masters programs at Bard College and at Goldsmiths College, and has lectured widely in university and other cultural contexts. She obtained her B.A. in Art History from University of Toronto and her M.A. in Curatorial Studies from Bard College. She did a few years of her PhD at the Centre for Research Architecture at Goldsmiths and might one day get back to it.