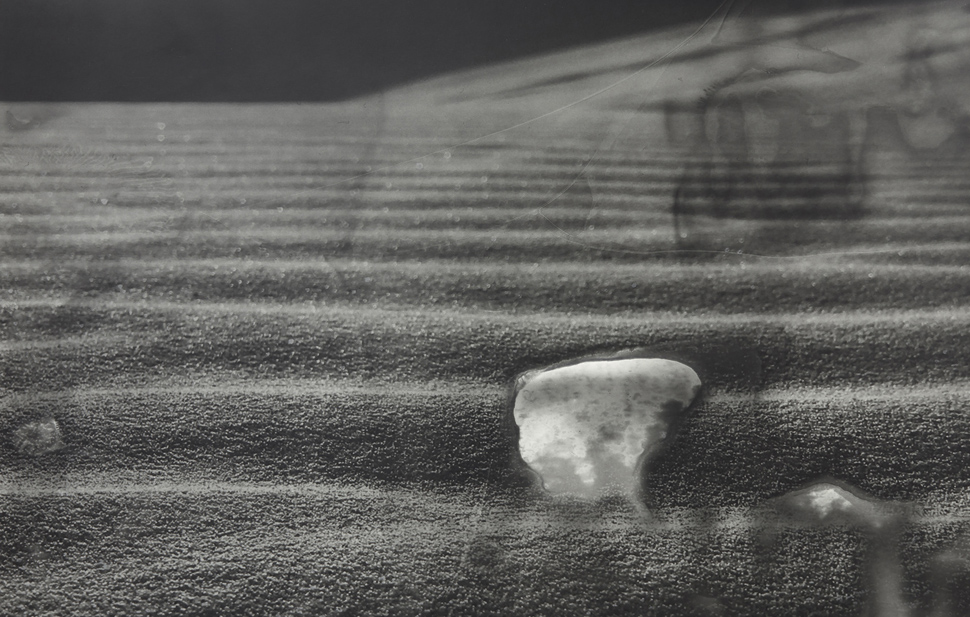 Enough continues Eileen Quinlan’s investigation into the material conditions of vision, through a new installation of densely tactile black-and-white photographs produced by the American artist over the last two years. Across digital and analogue practices, Quinlan’s work at Gallery TPW traces multiple regimes of image engagement: the ongoing scroll of an online search procedure, the transformative nature of the photographic process, the circular intimacy of a self portrait, or the appropriation of images made possible within the creative commons. Littered with holes, tears, and rupture-points, the photographs of Enough form new apertures, imagining alternative ways of seeing in moments of both large-scale crisis and everyday tenderness.

Whether rephotographing images of violence and environmental catastrophe, or experimenting with the mundane surfaces of her glass shower wall, Quinlan’s practice circulates in the immediacies of a home studio. Making work during early motherhood caused Quinlan to move within new time constraints and bodily intensities, expanding on her distinctly material approach to her photographic practice. Enough welcomes a tactile, embodied form of sight; featuring images that stimulate vision’s ongoing entanglements within the realms of touch.

Enough can also stand as a potential call to action, a line drawn in the sand. Faced with the realities of an apocalyptic present, Quinlan has turned to her intergenerational feminist networks, sustaining professional, creative, and personal allegiances with other women as a way to produce alternative frameworks for making images today. To trace these affinities, Enough will feature a residual gesture from TPW’s preceding exhibition—A Body Knots by Laurie Kang—in reference to Quinlan and Kang’s ongoing friendship and history as teacher and student. Gallery TPW will also publish an epistolary exchange between Quinlan and her long-time printer and colleague Julie Pochron, discussing female friendship and their criss-crossing trajectories through photography’s commercial and artistic industries.

Recent exhibitions include Viva Arte Viva, the 57th International Art Exhibition, Venice Biennale, curated by Christine Macel (2017), SYSTEMATICALLY OPEN? New Forms for Contemporary Image Production at the LUMA Foundation, Arles (2016), and Always starts with an encounter: Wols/Eileen Quinlan, produced by Radio Athènes and curated by Helena Papadopoulos at the Museum of Cycladic Art in Athens (2016), Image Support at the Bergen Kunsthall (2016), and Transmission, Recreation, and Repetition at the Palais de Beaux-Arts Paris (2015), What Is a Photograph? at the International Center for Photography (New York) (2014), Outside the Lines: Rites of Spring at the Contemporary Art Museum Houston (2014), and New Photography 2013 at the Museum of Modern Art (New York, 2013). Her most recent exhibition of new work, Dune Woman, was on view at Campoli Presti in London in the summer of 2017.