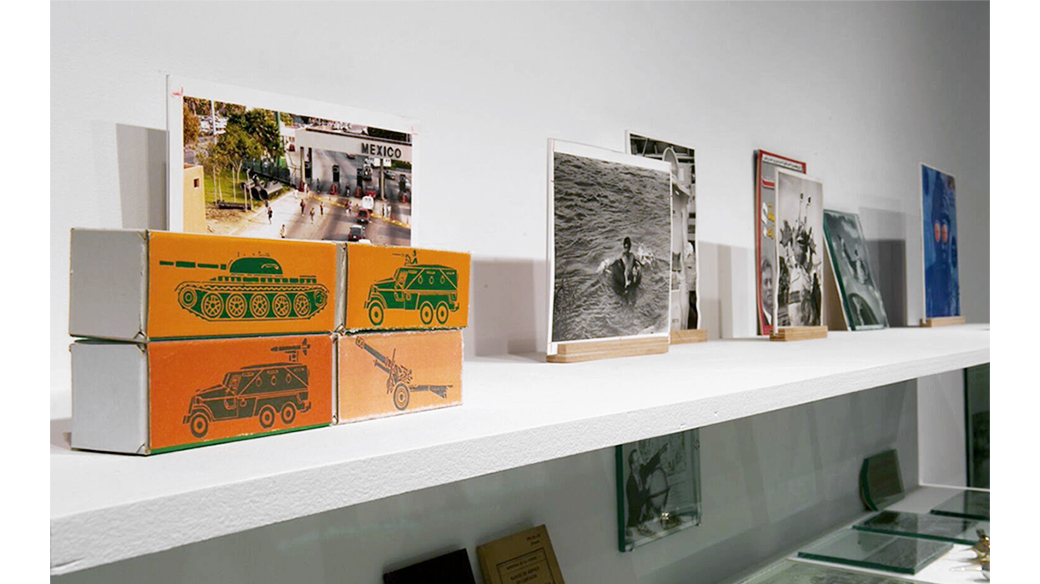 Can You Pull In An Actor With A Fishhook
Or Tie Down His Tongue With A Rope?

Visual and performance artist Rana Hamadeh develops long-term research projects that think through systems of justice, militarism, histories of sanitation, and theatre. Invested in a curatorial approach within her artistic practice, she works on long-term discursive, research projects that operate as umbrellas for a growing series of performances, choreographic/cartographic works, installations as stage sets, and writing projects. Her work stems from an extended investigation into specific concepts and terms, treating the field of theory as fiction. For her exhibition and performance at Gallery TPW, Hamadeh presents a new iteration of her long-standing research project Alien Encounters. Under this umbrella Hamadeh considers notions of alien-ness – as that which is outcast with regards to the law as well as that which is extraterrestrial.

Departing from her claim that justice is the extent to which one has access to the dramatic means of representation – the measure to which one can access theatre – the focal point of the exhibition is an eight-channel sound play, Can You Pull in an Actor with a Fishhook or Tie Down His Tongue With a Rope? (2014). The work takes the Shi’ite ceremony of Ashura, as a field for commentary and research. The theatrical religious ceremony restages the battle of Karbala during which Imam Al Hussein (626–80 AD), the grandson of Prophet Mohammad and an allegorical reference to the figure of the oppressed, was killed. Through a series of rites and orations over the course of ten days each year, Ashura mourners recount the battle’s events, weep and inflict wounds onto their bodies. Fluctuating between the theatrical and the actual witnessing of the crime, Ashura mourners constitute themselves as testimonial subjects while embodying the roles of the oppressor and the oppressed at once. Treating Ashura as a dramaturgical framework that underlies the entire politics of oppression in Lebanon and Syria, Hamadeh decodes, reorders and re-choreographs the ceremony’s theatrical components and considers whether it is possible to script Justice – to rehearse, narrate, weep, chant, choreograph, or even spectate justice.

Hamadeh comes to Toronto via collaboration with Western Front Gallery in Vancouver, with generous financial support of the Mondriaan Fund.

Rana Hamadeh is from Beirut, Lebanon and is currently based in Rotterdam, Netherlands. Her work has been shown at Western Front, the 8th Liverpool Biennial, The New Museum, CCA Wattis Institute, EVA International, KIOSK and Steirischer Herbst Festival (2014); 12th Lyon Biennale, The Lisson Gallery, Beirut, Witte de With (2013); Townhouse Gallery (2012); Van Abbemuseum (2011); Beirut Art Center (2010). She has an MFA from the Dutch Art Institute/ArtEZ, and is currently auditing within the Curatorial Knowledge PhD programme at Goldsmiths University, London.