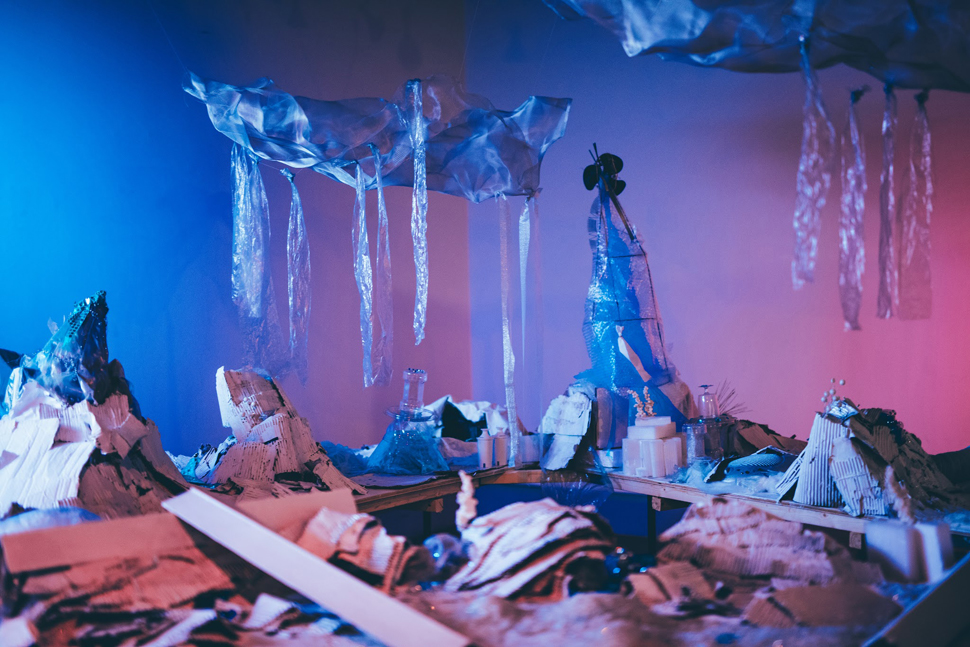 Alongside the exhibition Triangle Trade, Toronto-based writer Yaniya Lee joins Gallery TPW as a guest curator of public programs for the course of the project. Lee will engage local Black artists and thinkers as a parallel to the ongoing conversations that have prompted Jérôme Havre, Cauleen Smith, and Camille Turner’s work.

Habits of Assembly is a Black study group that practices new ways of being together. Black and POC folks are invited to attend a special gathering of HoA at Gallery TPW. Please RSVP at habitsofassembly@gmail.com.

M. NourbeSe Philip is a poet, essayist, novelist and playwright who lives in the space-time of the city of Toronto where she practised law for seven years before leaving to write. Among her five published books of poetry are the seminal, She Tries Her Tongue; Her Silence Softly Breaks, Looking for Livingstone: An Odyssey of Silence, and Zong!, her genre-breaking exploration of memory, history and the untelling of the transatlantic slave trade. Her fiction includes short stories and her young adult novel, Harriet’s Daughter. She has published four collections of essays, including the forthcoming collection, Blank (Fall, 2017). She has published one playscript, Coups and Calypsos and adapted her novel Harriet’s Daughter for the stage. Among her awards are the Pushcart Prize (USA), the Casa de las Americas Prize (Cuba), the Tradewinds Collective Prize (Trinidad and Tobago), the Lawrence Foundation Prize for short fiction (USA), as well as the Arts Foundation of Toronto Writing and Publishing Award. Her play, Coups and Calypsos, was a Dora Award (Canada) finalist. She is a Guggenheim Fellow in Poetry (USA), a McDowell Fellow and a Rockefeller Foundation (Bellagio) Fellow.

Jérôme Havre’s practice concentrates on issues of identity, communities, and territories, investigating the political and sociological processes of contemporary life as they relate to nationalism in France and Canada. Havre adopts a multidisciplinary approach in his exploration of these themes and their attending questions; he uses myriad tools and methods to make tangible the conditions of identity within situations of social transformation. Since 2001, he has exhibited in Europe, Africa, and North America. Recent shows include Talking Back, Otherwise, Jackman Humanities Institute, University of Toronto; Paradis: La fabrique de l’image, espace d’art contemporain 14°N 61°W, Martinique; Land Marks, Art Gallery of Peterborough, Ontario; and Reiteration, Art Gallery of Ontario, Toronto. He is currently based in Toronto.

Cauleen Smith is an interdisciplinary artist whose work reflects upon the everyday possibilities of the imagination. Drawing from structuralism, third-world cinema, and science fiction, she makes things that deploy the tactics of these disciplines while offering a phenomenological experience for spectators and participants. Smith is currently based in Chicago; she will join the faculty of the studio-art program of California Institute of the Arts in January 2018. She has presented solo at the Center for Contemporary Art and Culture, Portland, Oregon; the Contemporary Arts Center, UC Irvine; the Art Institute of Chicago; The Kitchen, New York; and the Museum of Contemporary Art Chicago. Smith is the recipient of several grants and awards, including the Rockefeller Media Arts Award, a Creative Capital Film/Video grant, a Chicago 3Arts Grant, the Artadia Award, and a Rauschenberg Residency, and a Herb Alpert Award in the Arts in Film and Video. Smith is represented by Corbett vs. Dempsey, Chicago, and Kate Werble, New York

Tau Lewis (b. 1993) is a Jamaican-Canadian artist living and working in Toronto, Ontario. A self-taught sculptor, Lewis combines natural and synthetic materials to create simulations of living things. She considers the history and symbolism of each material, exploring the political boundaries of nature, identity and authenticity. Her work is bodily and organic, with an explicit strangeness and subtle morbidity. Her current practice relies heavily on her surrounding environment; she constructs sculptural portraits using found objects, repurposed materials and live plants sourced from urban and rural landscapes. She connects these acts of repurposing and collecting with diasporic experience and black bodies. Her portraits are recuperative gestures that counter persistent tendencies to erase or peripheralize black artists and narratives within Canadian art and history. Lewis has exhibited at the Art Gallery of Ontario, the Spring Break Art Fair in New York and New Museum, New York. She has received support from Toronto Arts Council and Ontario Arts Council. Recent and forthcoming exhibition sites include: Night Gallery, Los Angeles, USA; COOPER COLE, Art Gallery of York University, Toronto, Oakville Galleries, Toronto, and Plug In ICA, Winnipeg.

Charmaine Lurch is a Toronto-based interdisciplinary visual artist. Lurch’s répertoireintertwines race, science and art in both 2D and 3D constructions. Her research on the resolute and active nature of Black life in North American and Caribbean societies, and her investigations on wild bees, are both framed within a conversation on materiality in the context of the landscape. Lurch holds a Master’s degree in Environmental Studies from York University, and diplomas in design and illustration from Sheridan College, both in Ontario. In addition, she studied at The Ontario College of Art and Design University in Toronto, and The School of Visual Arts in New York City. Her work has been exhibited in a number of venues including the Royal Ontario Museum, Scotiabank Nuit Blanche, The University of British Columbia, and the National Gallery of Jamaica. Presently, her work is on display in the Art Gallery’s show titled Every. Now. Then. Reframing Nationhood which is part of Canada’s 150th celebrations. charmainelurch.ca


Yaniya Lee‘s interdisciplinary research draws on the work of Black Studies scholars to question critical reading practices and reconsider Black art histories in Canada. From 2012-2015 she hosted the Art Talks MTL podcast, a series of long-form interviews with art workers in Montreal. In 2016 she programmed Labour, Land and Body: geographies of de/colonialism for Vtape’s Curatorial Incubator. Last fall, with members of the 4:3 Collective, she organized the MICE Symposium on Transformative Justice in the Arts. Lee was previously on the editorial advisory committees for C Magazine and FUSE Magazine. She is a founding collective member of MICE Magazine and a new member of the EMILIA-AMALIA working group. This summer, Lee participated in the Banff Research in Culture: Year 2067 residency. She is the 2017-2018 writer-in-residence at Gallery 44 and currently works as the associate editor at Canadian Art Magazine.