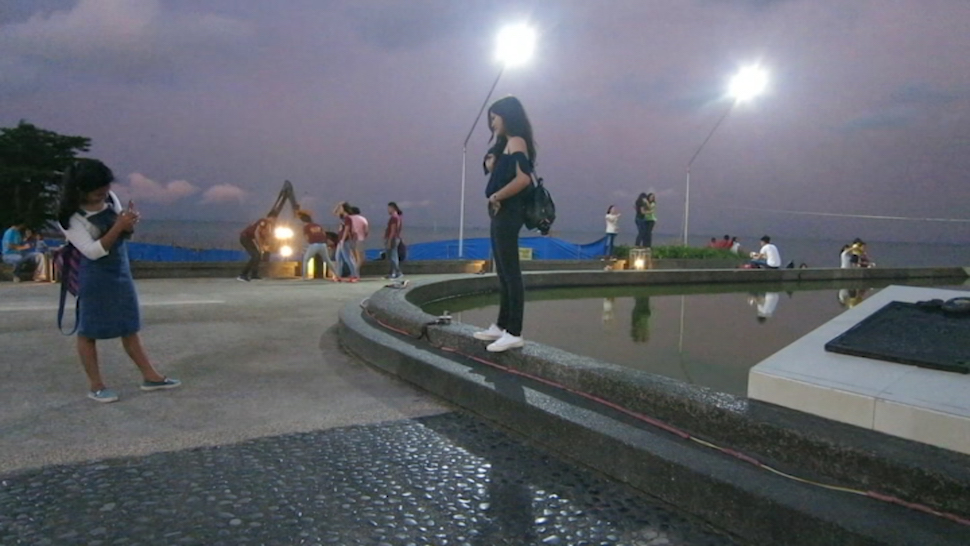 Mga balakid sa bukang liwayway (obstacles at dawn) is a collection of three video works that attempts to unpack the contradictions and nuances of being a settler-immigrant, a participant and observer of our late capitalist system and an artist living and working in a climate of drastic change. The title refers to the waking challenges met within our daily lives as obstacles are presented and experienced as soon as we open our eyes. Dawn is also the demarcation that marks the beginning of twilight before sunrise, a transitional moment in which the sun is about to kiss the earth.

Goldfish is a meditation on the intersections, parallels and cycles of colonial violence and natural catastrophes. The work primarily focuses on a monument created by Anastacio Caedo in MacArthur Leyte Landing Memorial National Park in Tacloban City where it commemorates the return of General Douglas MacArthur. His supposed return was monumentalized as a symbol of American liberation of the Philippines against the Japanese occupation during World War II.

The video was shot in 2017 five years after the super typhoon Haiyan (also known in the Philippines as Yolanda) passed through the region, affecting 11 million people and taking 6,300 lives. Goldfish documents the reconstruction of the MacArthur monument after the hurricane and the peripheral activities occurring around it. The ambient sound of birds and dogs embedded in the video was recorded the 1st week of the COVID lockdown in Quezon City, Philippines in March of 2020.

In this iteration of the video, Vancouver-based artist Simon Grefiel narrates personal stories in Waray (a local dialect in the Eastern Visayan region where Tacloban City is located) based on his family’s accounts of living and experiencing Tacloban city. Grefiel who is also an immigrant and diasporic artist from the Philippines examines the discrepancies of cultural loss and retrieval through storytelling, translation and Visayan folklore.

Hives is an inquiry and an attempt to understand the cultural symbol of working class and diasporic Filipinos through the multinational fast food chain Jollibee, which has opened at least 978 franchises in the Philippines and a total of 167 chains worldwide. Established in 1978 by CEO Tony Tan Caktiong, a chemical engineer graduate who immigrated from Fujian, China, Jollibee developed an American influenced and Filipino style menu to cater to the Filipino masses. The appropriated formal aesthetic and uniform of Jollibee recalls popular western vernacular imagery – perhaps to aggrandize and legitimize its iconographic status. The uniform features a glove and boot unmistakeably taken from Disney cartoon characters, in addition to an Americana-like bowtie accompanied with the European chef hat that suggests ‘quality food.’ According to the company, their white-faced mascot is meant to epitomize Filipino optimism and Filipino working folk by way of an anthropomorphic bee character. The bee “hops around and produces sweet things for life and is happy even though it is busy.” The cultural affinity to the working bee is not mere coincidence but a precise orchestration of cultural mimicry and simultaneous belonging to and resistance towards the west. Even with the pervasiveness of Jollibee’s mascot and its loaded meanings, it is clear that the post-colonial attitude has always been alive and present in the Philippines, consistently working its way to the local and international hive mind. Through the many borrowed signifiers that are featured in the video, we may begin to dissect the spurious smile of an ethnic group whose primary economic export are nurses and caregivers.

Using cell phone footage to document my trips across Canada, Philippines and Mexico, A diary of restraints and instants employs special effect transitions as a metaphorical understanding of shifting change, blurring geographical boundaries and hybridized identities. I was drawn to the cultural connections in these places, both real and imagined, sandwiched within colonial narratives that both connect and reveal layers of shared complexities despite geographical disparateness.

Patrick Cruz is a Filipino-Canadian artist based in Quezon City, Philippines and Vancouver, BC as an uninvited guest on the land of the Coast Salish peoples –Sḵwx̱wú7mesh (Squamish), Stó:lō and Səl̓ílwətaʔ/Selilwitulh (Tsleil-Waututh) and xʷməθkʷəy̓əm (Musqueam) Nations.

Cruz studied Painting at the University of the Philippines and received his Bachelor of Fine Arts from Emily Carr University of Art + Design, a certificate in clownology and a Master of Fine Arts at the University of Guelph. His intuitive inquiry is informed by his interest in cultural hybridity, the project of decolonization, and the paradoxical effects of globalization. Most Recently, Cruz’s work has taken form in playful configurations manifesting in various activities such as cooking, curating, trading and freestyle rapping.

Goldfish was produced in collaboration with Simon Grefiel, with sound engineering by Dana Qaddah.

Simon Grefiel was born and raised in Tacloban City, Philippines, and currently lives north of the Fraser River, on the unceded territories of QayQayt and Kwikwetlem First Nations. Through digital works, performances, and objects, Grefiel explores language, ethnographic archives, spirits, and speculative narratives of human migration. Grefiel’s visual language is informed by dreams, familial stories, and images, proposing new ways of experiencing the supernatural realm and the material universe.