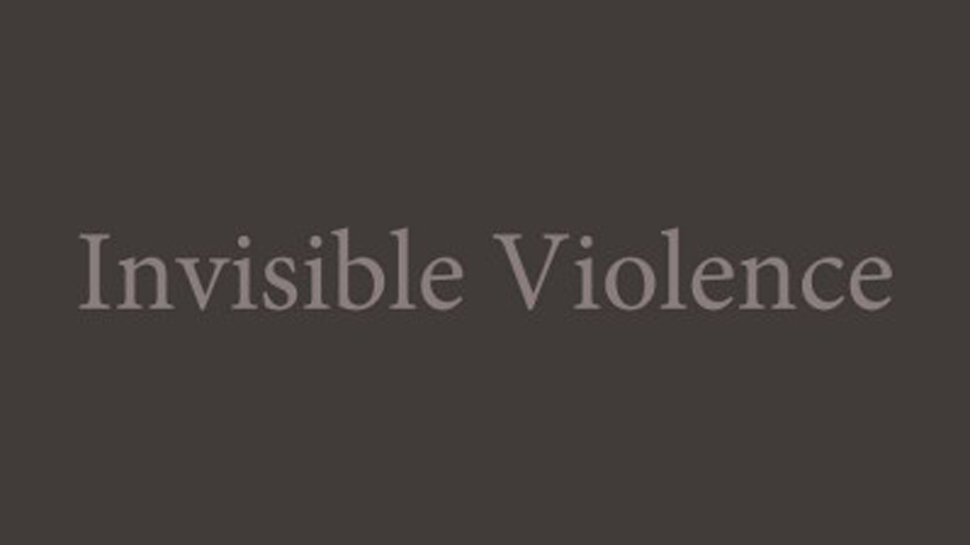 Montreal-based writer Amber Berson shares her reflections on the workshop titled “The Form of Violence / The Form of Exhibition” presented by Liz Park for Invisible Violence at CEREV (The Centre for Ethnographic Research and Exhibition in the Aftermath of Violence) at Concordia University on February 27.


In my time with CEREV (The Centre for Ethnographic Research and Exhibition in the Aftermath of Violence), I have had the privilege of working with or learning about a wide range of projects dealing with curatorial methods for difficult knowledge. Few, however, have resounded as deeply for me as Liz Park’s Invisible Violence has. Her project is, as its title suggests, about invisible violence, and while its subject matter is of the most difficult type, the artworks that make up the publication neither shock nor ease the viewer. Rather, the goal of the project – to promote intimate contemplation on the subject of mass, as well as personal, violence – is achieved through subtlety and discretion.

We live in a culture not shy of overt displays of violence. Yet, covert violence is rarely discussed, investigated, or considered. In short, we are comfortable viewing, discussing, and disseminating images of extreme violence, and our pleasure media (films, television, music, and books) abound with violent imagery. However, we are generally uncomfortable with frank, clear, level-headed or emotionally-driven talk about systemic violence, genocide, or other difficult knowledge. Deborah Britzman describes difficult knowledge as that which makes us uncomfortable to speak about, which is beyond taboo, and for which there might not necessarily be an easy, pre-conceived vocabulary. This terms is opposed to her definition of lovely knowledge – that which we feel more than comfortable, and even somewhat proud, to discuss.1 An example I find personally illuminating and thought-provoking is the use and depiction of First Nations people during the 2010 Vancouver Olympics. On one hand, the opening ceremony, the cultural components, the logo, and the overall presentation of the 2010 Olympic Games celebrated Aboriginal peoples in Canada and elsewhere. There was poetry by celebrated Mohawk feminist performer Pauline Johnson (1861-1913) and presentations by many First Nations groups, including the Métis and the Inuit. This is undeniably lovely and something to be proud of. That the Olympic ceremony was designed by David Atkins Enterprises, an Australian firm, only slightly dampens the endearing quality.2 What is difficult is the fact that leading up to, and for the duration of the Olympic games, Vancouver’s homeless population was ejected from the downtown core and areas in which Olympic tourism predominated.3 Furthermore, according to the results of the 2011 Vancouver Homeless Count “nearly one in four (27% or 394) of the surveyed homeless population was a person of Aboriginal ancestry,”4 a statistic made more shocking when considering that First Nations people represent less than 4% of the total Canadian population.5 The invisible violence that Liz Park speaks to in this discursive series points to the difficult knowledge embodied by the four sets of historic events and experiences presented in her publication.

Invisible Violence is presented as a series of postcards, or pages of an unbound book, as Park herself refers to them. As such, we are invited to hold and therefore to take care of the images, which, once put in our own hands, become impossible to ignore. Most gallery visitors spend very little time with a work of art. Perhaps it is a combination of hyper-stimulation and compassion fatigue6 that makes this even more the case when presented with difficult subject matter. Maybe this is why Park’s unique, low-tech format is so successful. By rendering the experience intimate, the viewer, as evidenced in the CEREV workshop, actually takes time with the images. Unlike a gallery exhibition, which often has a fee to view, Park’s project gifts the audience the postcards, which are a challenge to unwrap. The pleasure of receiving and then decoding the gift is part of Park’s curatorial intent. In receiving the gift, we become aware of our responsibility towards it, the images contained on the pages and of their messages.

In the workshop that Park led at CEREV, much of the feedback circulated around the project’s presentation. Most participants were suitably wooed by the gift, but confused by how to properly view the work. Was there an intended order to the un-numbered pages? What happens if, in fumbling with the packaging, the pages fall out of sequence? What about the essay, located at the back of the stack? Should we wait to read it or can we jump to it? Park humoured the questions but did not provide the answer. The intention seemed to be that we were free to consider the work however we chose, for as long as we wanted, in the order we decided, and with or without any background information provided in the text. While confusing for some, we have to remember that more conventional exhibitions come with equally vague viewing instructions and that, in accepting the gift, opening it and holding the work, we have already removed the possibility of choosing not to look.

Beyond the publication, the project exists as a blog, as well as a dialogue between researchers, artists, curators, and others informed and interested in invisible violence. The online component consciously does not reproduce the images by the artists. This forces the viewer to actively search out the project, to work to find answers. But it also speaks to a larger concern – that of reproducing violent images. While the violence in Park’s curatorial project is “invisible,” it is still very much felt, and in giving the viewer the choice to look (both on and offline) Park’s presentation takes responsibility for the violence. Invisible Violence was produced by Artspeak in Vancouver and Gallery TPW in Toronto, workshopped at CEREV in Montreal, and presented at the Center for Photography at Woodstock in Woodstock, NY. The collaborative project follows the feminist methodology that Park has been developing as a curator and writer.

For Invisible Violence, Park curated the work of four diverse artists: Rebecca Belmore, Ken Gonzales-Day, Francisco-Fernando Granados, and Louise Noguchi. A detailed description of the work of each artist is available as part of Park’s project, created in dialogue with Judy Ditner, a doctoral candidate in art history at Boston University. What is important for us to consider are the ways in which the work has been brought together to speak as a collective. Invisible Violence is, as Park herself describes it, a geographically and discursively dispersed project, both in the sense of the non-traditional format of the exhibition and the subject matter. Each artist presents a different type of (invisible) violence and, in their own way, makes it visible again by turning our attention to it. In order to understand what we are seeing when we look at their work, we must choose to inform ourselves. What common narrative underlies the four artists’ work? All four artists are working with photographs, in which the violence has been covered (Belmore), erased (Gonzales-Day) or simply implied (Granados, Noguchi). Most are working with found or appropriated photographs. What brings them together then, in my opinion, is that the violence made visible by the artists is – while often executed by individuals – the result of the systems of injustice and violence we continue to live with, daily.

Throughout her presentation at CEREV, Park invoked the writing of Hannah Arendt – a twentieth century political theorist whose work deals with the nature of power and the subjects of politics, authority, and totalitarianism. Arendt writes that it is “a rather sad reflection on the present state of political science that our terminology does not distinguish among such key words as power, strength, force, authority, and, finally, violence.”7 I read this in support of the idea that the violence Park is making visible is that of mass-scale, institutional, latent and/or covert violence. By visualizing invisible violence, Park dares to speak to the difficult knowledge so often socially subjugated.

Park’s curatorial project questions the way in which we produce, circulate, and consume violent images. It restores agency to the viewer by literally putting the power to engage in their hands, as well as by asking, and not demanding, that we question – through subtle and discrete means – the effect and affect of violence on society.