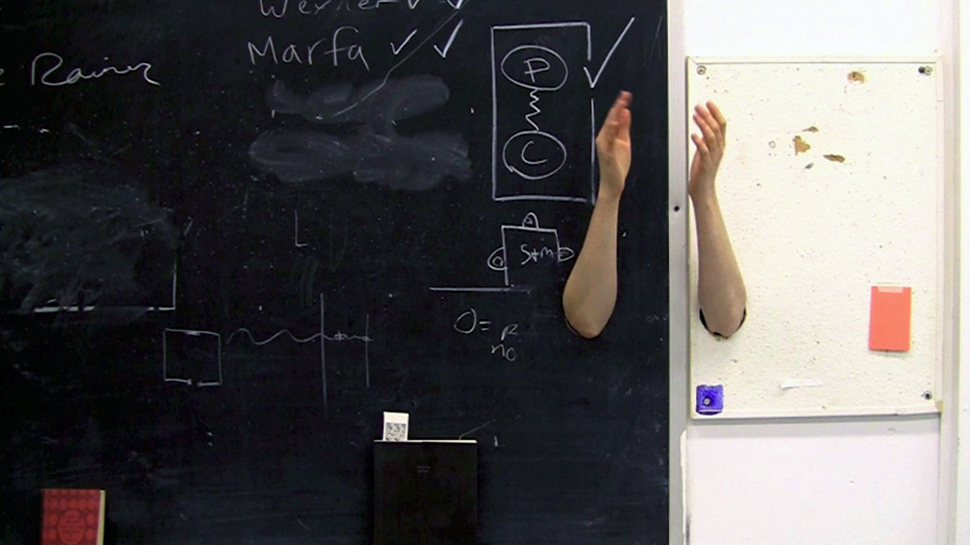 Notes on Back to School: Zmijewski’s Choices

Polish artist Artur Zmijewski’s 2005 video Choices is a challenge to describe— it’s not entirely a documentary, nor is it wholly fiction and it does not feel like video art. Choices shows something that is also difficult to categorize, a “learning experiment” hosted by the Centre for Contemporary Art in Warsaw. It looks something like an art exhibition except that groups and individuals (children, adults) continually enter the space and make art over top of or in addition to whatever art is there already. There is no narration in the video, no titles aside from the English subtitles translating the spoken Polish, no credits—nothing to explain what Choices is about. Choices comes with no verbal information of its own which makes sense since, as Vesna Krstich (curator of Back to School) tells us, Zmijewski was interested in the limits of his former art teacher’s methods that, “employed a range of conceptual activities that were designed to explore the ‘didactics of partnership’ and the process of non-verbal collaboration.”

Krstich wondered whether the contributions of the participants in the Choices “learning experiment” could be meaningful if they didn’t understand what they were a part of. With no verbal explanation, and no space for reflection built into the process, what did participants take away? Zmijewski and his art school classmates may have found Choices to be magnificently jarring because of its extreme take on their former teacher’s methods and rules. For participants who had no ties to Zmijewski’s former teacher the experiment might not have been as much of learning experience. These others may have experienced Choices as merely an unusual art exhibition that invited manipulation and play. It’s as if these visitors are props used to demonstrate and push forward the perversion. They comply with Zmijewski’s unstated proposal as quickly and unquestioningly as they cooperate with the more typical direction to not play, not touch, and not manipulate art at an art exhibition. They are not necessarily invited to participate in a thought process or moment of reflection leading up to or following their interactions with Choices.

Audience members at the screening of Choices on September 19 remarked that the work feels unresolved, that it does not come to a point, and that it feels like a sketchbook for some of Zmijewski’s other, more transgressive works. Choices is chaotic and untidy. Krstich used the word “destruction” to describe participants’ actions.

Instead of destruction, the word palimpsest comes to my mind, where previous artworks are effaced with only some traces apparent in whatever replacement is added. The obliteration of each other’s creations was a consequence of the additive process participants engaged in; each action or installation was like a placeholder until the next one was initiated. To me Choices is about flexibility more than destruction: allowing the art to be in process rather than being a static creation.

What bothers me now is the idea that most of the newer actions and objects in Choices do appear to wipe out the ones that came before without much thought or care. I have perceived other examples of adding new to old where the result did not necessitate erasure.

In the context of Back to School, a research residency about arts and education, I began to consider Choices as a model for a flexible curriculum or education system, one that allows participants to take part in its creation and recreation. I am all for flexible systems—ones that welcome change—but I find the rashness in Choices to be unsettling when I re-envision it as a system of education.

I have not yet mentioned just how crappy the artworks in Choices were. Although hilarious and awesome in their own ways, the gestures, paintings, and sculptures were, on the whole, unremarkable, uninspiring, unbeautiful, and not all that good. The actions and additions of participants were for the most part unceremonious, messy, and seemed to be randomly executed. Choices was constantly changing, but it did not necessarily grow or improve or transform towards anything. I keep wondering if projects or systems to which multiple untrained, uninformed people can immediately, quickly, and messily contribute change—without careful discussion, reflection, explanation, or consideration—will tend to result in fun processes with crappy products.

Handfuls of clay are thrown against white walls.
Tall metal lockers are shifted around a space, piled up, and rested on their sides.
Purple messages on walls are covered with a thick layer of wet, red clay.
Clothing is stapled to a wall to spell out the word “choices” in polish.
Antique-looking, dark wooden doors are removed from their hinges.
The bottom of a locker is filled with soil. Seeds are planted by a woman and a child.
More soil is laid down on the floor and more plants planted.
An ultrasound photo of an unborn baby is taped to the door of a locker by a woman who says, “I am a living common area, personal area.”
A weekly clay workshop taught by artist Pawel Althamer, Zmijewski’s collaborator on Choices, to adults with development disabilities is brought to Choices. As they sit together molding clay sculpture, they are asked, “Do you feel like a contemporary artist?”
Objects are lit on fire.
Small wooden figures on sticks are burned leaving beautiful charred remains.
A locker is carried outside to a green patch and its contents are lit on fire. A ring of flame is lit around the burning locker.
Clear alcohol is poured into shotglasses set in a circle on the floor and lit on fire.
Expanses of paper are covered in black designs painted by groups of children who run and giggle.
The murals are hung vertically and then lit on fire. A fire extinguisher sits nearby, presumably in case of the fire spreading to the walls, the ceiling, or the many objects displayed nearby, which it surprisingly does not.
A creepy rubber mask with a stapled-shut mouth is poked at by children and the stiff arms of a fabric dummy are tugged and punched by the same children.
A giant letter “A” that signifies something is brought into the space by a man who has been fasting for 28 days. Another “A” will be introduced at the end of the fast.
A girl is wheeled around in a shopping car through an art exhibition—possibly somewhere else in the Centre for Contemporary Art—and is reprimanded by a guard after she reaches out to touch a sculpture. A discussion is had between the girl and Althamer who agrees she should make her own art exhibition “in which everything can be felt, touched, and constantly modified.”
Street workers who have entered Choices are asked to pose for photographs. Their photos are displayed on one of the walls.
Nighttime hot air balloon rides are offered to the lucky winners of a draw.
Paintings are painted over and sculptures are added to.
Books with covers the colours of autumn leaves are set in a row on a shelf.
Brightly coloured bras and thongs are fastened to a tree-like sculpture.
Everything is painted white—every soft, hard, crumbly, and solid surface is covered in white paint.
Letters of the alphabet are formed by people dressed in hooded, white coveralls. A photograph of each people-letter is taken and the suggestion is made by Althamer that this font could be used for a text about Choices.