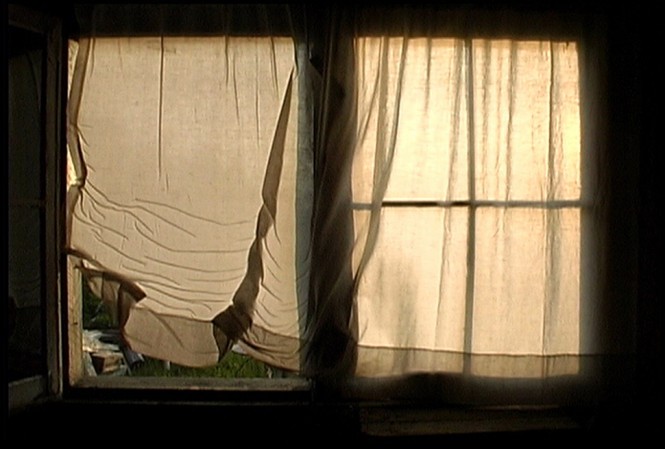 Solar Breath (Northern Caryatids) is a 62″ loop, shot from the artist’s summer cabin in rural Newfoundland, which captures how over the years “a mysterious wind performance takes place in one of the windows, about an hour before sunset.” The artist explains, “While on one level Solar Breath is merely a fixed-camera documentary recording, it is also the result of years of attention … (It) is 62 minutes of the most beautiful, eloquent movements and pliages that the sun, wind, windows and curtain have yet composed. Chance and choice co-exist.”

“What I saw in these sun and wind events was their potential as art. I did not record these “events” to share this modest phenomenon from my daily life with others. No, the rich play of light, surfaces and durations said to me: this real, un-staged event contains the elements which are essential for a contemplative time-light-motion work of art…”

Michael Snow’s prolific career has encompassed experimental filmmaking, sculpture, painting, music, drawing, and photography. He first exhibited in 1956 and in the 1960s became internationally renowned with his film “Wavelength”. Based in Toronto, he has exhibited internationally over the past five decades. Recent solo exhibitions have included Angels Barcelona (2009), BFI Southbank Gallery, London (2008), and the Museum of Modern Art, New York (2005). His work can be found in many of the most renowned contemporary art collections in the world, including the Museum of Modern Art in New York, the Musee d’Art Moderne de Paris and the National Gallery of Canada. He has represented Canada at the Venice Biennale and has exhibited at most international major biennials.