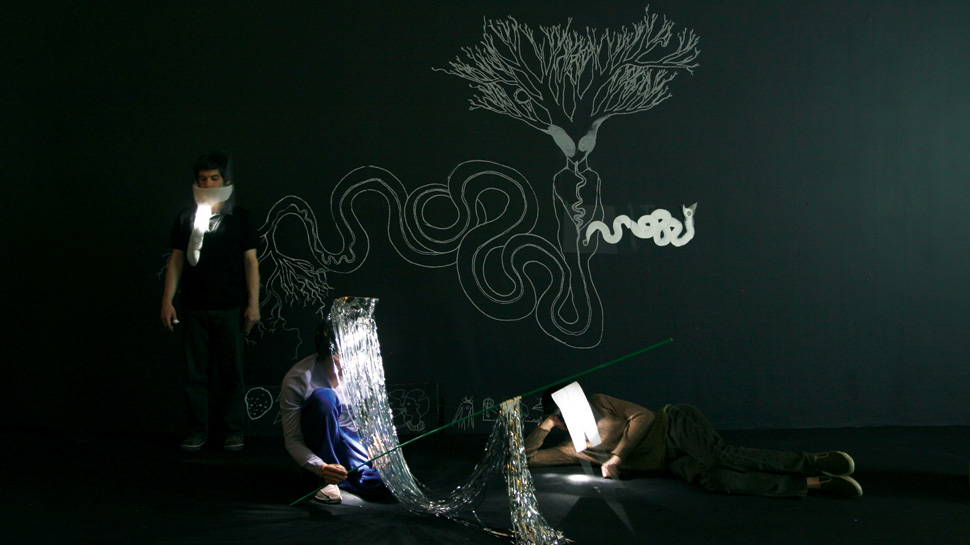 Gallery TPW and Images Festival are thrilled to co-present Sung Hwan Kim’s In the Room, manifesting first as a live performance in collaboration with dogr and Byungjun Kwon, and then as an exhibition developed out of the visual and narrative components of the performance. Kim’s In the Room series is rooted in a multi-disciplinary process weaving together video, music, drawing, as well as live and pre-recorded performances. In addition to a series of wall drawings, paper sculptures and staging elements created for the performance, the exhibition installation features two video works: Dog Video (2006) and From the Commanding Heights… (2007). The videos mimic many of the processes present in the live presentation. Most notable is Kim’s unique form of projection performance and his use of the video camera with a plexiglass screen. This lo-tech set up allows Kim to layer video feed of his body with a type of “live animation” often associated with the use of an overhead projector. The fantastic stories and elliptical narratives presented in this work operate at the borderline of the imagined and the actual.

dogr (David Michael DiGregorio) was born in Boston in 1979 and is now based in New York. With a background in Baroque, choral gospel and electro-acoustic music, as well as experimental 16mm filmmaking, dogr is a performing musician and composer who sings layered and spatial songs. His upcoming album, In Korean Wilds and Villages, is due for release on Sonig Records, Germany, April 2009. Recent performances include Établissement d'en face projects, Brussel, 2009; Insa Art Space, Seoul, 2007; Gallery 27, Uiwang, Korea, 2007; De Appel, Amsterdam, 2007; STEIM, Amsterdam, 2006; BAK, Utrecht, 2006. More at: www.dogr.org or www.myspace.com/dognap