The Icon We Love to Hate 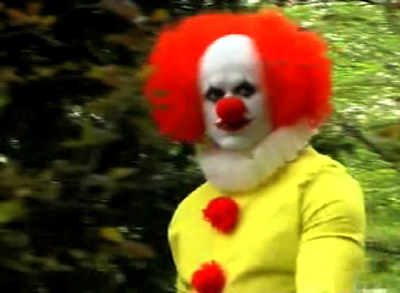 In his article for The New Republic entitled The Clown as Hero, art critic Jed Perl states, “The clown is the mismeasure of man. He represents humanism run amok. A zonked-out, botched humanism. He shows us man’s wildest urges, by putting on a funny or scary act… For the clown, all norms exist to be violated, all forms are turned inside out. And the insult to man’s dignity is meant to suggest our violent essence, our unruly urges-and so to make a mockery of art’s age.” 1

The above statement elucidates the interest in the clown as subject matter for art in recent years. Beginning with Bruce Nauman’s Clown Torture, continuing with Paul MacCarthy’s outlandish performances and culminating in Cindy Sherman’s book of self portraits as a clown in garish makeup, the clown is a perfect vehicle for artists who explore the dark side of life; because the clown, with his horrible makeup, oversized shoes and bulbous nose is, in the words of Candice Bergen “A compendium of creepy.” 2

The common clown comes across as unruly and amateurish, setting him apart from Silver Screen “clowns” like Buster Keaton, Fatty Arbuckle, Cantinflas and Charles Chaplin, who had a studied virtuosity, a classical approach to their physical buffoonery.

Thus the clown in contemporary art is used as a symbol for the current reaction and opposition against the austere formalist purity of high modernism. Clowning is a form of lowbrow popular entertainment, so a clown is an affront to all things classical and sophisticated. The clown is ridiculous, pathetic, and demonic. He is seen as the lowest common denominator for entertainment. The epithets “Bozo” or “Clown” thrown at people whom we deem stupid or incompetent are a clear indication of the regard with which the clown is held by society.

Contemporary artists use the clown as a means of attacking everything that is morally upright and politically correct. There is a certain hint of sleaze in the clown, characterized by a moral slipperiness, an aftertaste that is unsavory and fascinating at the same time. As comedian Bobcat Goldwaith puts it: “Most People get nervous when they see a clown, because clowns give off this vibe that they are going to make you touch their penis.” 3

In the estimation of Jed Perl, “…[the] stylized nature of their costumes and their masks can register as a denial of personality, for these props defy the sense of human mobility, suggesting that a single expression–that smile, that frown–is the sum of our being. (Children sometimes recoil in horror when a person they know puts on a mask, because the known has suddenly become unknown.)” 4

Artist Scott Redford alluded to this during an interview. When asked why some people are afraid of clowns, the artist replied that it is “Probably something from their childhood, when they were very young. My Dad once dressed up as the Sandman and had me on his shoulder and was carrying me off. All the adults were laughing but I was terrified. I thought it WAS the Sandman!”

It is precisely this ability to make the “known” unknown that appeals to contemporary artists. To the artist, the clown is an alter ego, a cipher, at once magical and mundane. As artist Scott Redford asserts, “I think clowns have many meanings so I’m not sure one can subvert something that is a cipher or archetype.” Thus, the clown affords the artist the benefit of inscrutability. The clown “persona” acts as a smokescreen that provides the artist with the creative license to be sick and subversive.

The works in this exhibition embody this tendency quite well. Scott Redford’s Clown Fuck Punk is a pornographic work in which a young punk summons a clown (presumably his id) to fulfill his rape fantasy. The punk sits at an office in an institution, reading manga and watching a computer screen. The punk appears bored, and one imagines that he is watching pornography. The punk goes to a balcony and sees a clown below, wearing a garish costume and walking barefooted on a well-groomed “wilderness”. Suddenly, the clown appears in the room and proceeds to sodomize the punk, forcing the punk to perform violent fellatio on him. When the clown has ejaculated, there is a reversal of roles; the punk spits water in the clowns face, and shoos the clown away like a pest. Suddenly we become aware of the fact that it is not the clown that uses the punk, but the other way around. It is the clown that is being used for sex, and when the punk no longer has any use for him, the clown is discarded.

Chantal Rousseau’s Clowns Just Want to Have Fun deals with the theme of pornography as a form of empowerment. Rousseau began using pornography as a way of reveling against the feminism of Andrea Dworkin (a vocal spokesperson for the feminist anti-pornography movement during the 70’s and 80’s) and Catherine MacKinnon. Rousseau explains: “their writing was essentially robbing women of any kind of sexual agency, at all, under the guise of Feminism”. Chantal Rousseau sees pornography as an “interesting and complicated topic” particularly when seen in the light of feminism: “People like to make rules and define things, and I found that problematic, which is how I sort of got into thinking about making work about sex. And I was happy when work about sex would be read as what it was. I was interested in it as a feminist thing, but at the same time, if you wanted to jack off to it, that was cool.”

Clowns Just Want to Have Fun employs the aesthetic of early video art, in the tradition of Lisa Steele’s Birthday Suit – with scars and defects. The artist sits in front of a static camera, wearing a black wig, a bulbous clown nose and poorly applied clown make up. She is completely naked. Rousseau proceeds to inflate a balloon by blowing into it in a very painful way, and then she gives fellatio to it. She then repeats this process with several other balloons for over twenty minutes. As Rousseau sucks on the balloons, she produces an extremely high-pitched noise. The unbearable noise of the balloons creates a jarring effect in relation to the titillating images of the artist’s naked breasts. Rousseau’s subject matter is not simply sex, but discomfort.

Ellie recreates a famous scene from Michael Mann’s 1995 film Heat (the first film in which Al Pacino and Robert De Niro appeared together on the screen) using two professional clowns.

In Mann’s film, De Niro plays an introspective and calculated professional thief. Pacino plays a homicide detective who is so obsessed by his job that he has neglected his family. Both characters are trapped by their identities and their specific roles. They are outsiders by virtue of their chosen professions, which dictate that which they can and cannot do.

In the scene parodied by Ellie, Pacino pulls De Niro over as he drives on an L.A. freeway, and invites the thief for a coffee at a nearby coffee shop. As the two men talk, Pacino explains that he often has a reoccurring dream in which he sits at a long table surrounded by all the victims on whose murders he has worked. The dead people sit in silence, with black eyes, because of the “eight ball” hemorrhages suffered by being shot in the head. They are bloated since they have been dead for days when they are discovered. The dead look at him and at themselves, saying nothing.

De Niro reveals that he, too, suffers from a reoccurring dream. In his dream, De Niro is drowning and must wake up and stop dreaming in order not to die. When asked if he knows the meaning of the dream, De Niro replies, “Yes… It’s about not having enough time…to do what I want to do.”

Robert Ellie takes the soundtrack from the original film and overdubs it onto his female clowns, so that they speak like tough men to humorous effect. One of the clowns wears a 19th Century maid’s outfit; the other clown wears a ridiculous fur hat and a bulbous red nose. The clowns take on the affectations of the thief and the homicide detective. Thus, a scene that is already filled with pathos takes on a ludicrous tone. These men are no longer a hardened criminal and a tough cop, but a pair of fools, a couple of Bozos trying to sort out their dead end lives. By substituting farce for realism, Ellie achieves a far more poignant effect than that of the original film.

As the two men recount each other’s dreams, Ellie’s video goes into a dream sequence composed of found footage smeared in bloodlike red paint: as Pacino talks about his murdered “balloon people,” a woman runs from an unseen attacker through a darkened hallway. A man’s body lies prostrate on a table, covered in blood. A cavewoman rescues a little boy from a lava flow, and a caveman (bearing an uncanny resemblance to De Niro) covers his face with his hands and weeps.

For Ellie, the dialogue between the two female clowns and the “dream sequence” in the video are indicative of a rational mind that can no longer cope. The message that Reheated conveys is: “I don’t understand my life like I thought I did, and nothing makes sense to me anymore.” Moreover, the rational mind, circumscribed by logic and accumulated knowledge, is no match for the intuitive power of the subconscious mind.

Like Redford and Rousseau, Ellie deals with binaries: The toughness of the male voices is contrasted with the ridiculousness of the female clowns. The funny affectations of the clowns are contrasted with the creepy found footage of the murder victims. Moreover, Ellie takes a “cops and robbers” film, with its archetypal roles, and transposes those roles onto another archetype: The clown.

Unlike the modern masters, who viewed clowns as a sort of noble representation of the artistic impulse, contemporary artists appropriate the image of the clown in a gesture reminiscent of that of a spiteful child that sticks out their tongue at a censuring adult. And so, contemporary artists pile up by the droves inside the tiny circus car of clown imagery.

Perhaps our dislike and fear of clowns stems from the fact that they present us with a reflection of our own foibles and vulnerability. As Robert Ellie puts it: “Clowns remind us that we shouldn’t take ourselves too seriously, and that failure and tragedy are normal and (with time), even funny.”