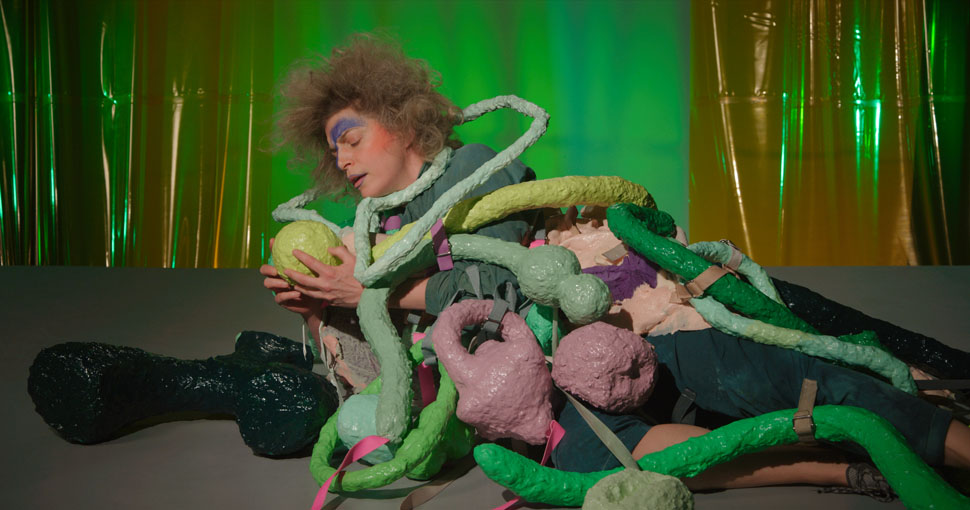 
To celebrate the closing of Chloë Lum and Yannick Desranleau’s exhibition What Do Stones Smell Like in the Forest? at Gallery TPW, join us for an evening reading session featuring three artists/writers sharing new written work from within the environment of Lum and Desranleau’s installation. Readings by Catherine Telford Keogh, Alize Zorlutuna, and Chloë Lum will engage in the messy, vibrant relationships between bodies and things; moments when objects speak back to us.

The evening will also feature a performance of Becoming Unreal by Lum and Desranleau. The duo’s gestural and vocal score is interpreted by Toronto-based artist Xuan Ye, producing a duet between a performing body and the objects that support its gestures and weight.

Catherine Telford Keogh works in sculpture and video. She has exhibited nationally and internationally at Galerie Antoine Ertaskiran, Montreal; Seattle Art Museum, Washington; Bronx Museum, NYC; Vox Populi, Pennsylvania; Greenpoint Film Festival,Brooklyn, NYC; and has mounted solo exhibitions at Roberta Pelan, Toronto; and Evans Contemporary, Peterborough. She holds an MFA in Sculpture from Yale School of Art and an MA in Women, Gender and Sexuality Studies from Yale University, and completed her BA in Fine Arts and Women Studies at the University of Waterloo. She lives and works in Toronto.

Alize Zorlutuna is an artist, poet, experimental cook, curator, intersectional feminist, committed pedagogue, and life-long learner. Working across disciplines, she investigates issues concerning identity and power, settler-colonial relationships to land, culture and colonial violence, as well as intimacy with the non-human, and technology. Her practice is informed by a critical engagement with historical narratives and their present-day impacts. Drawing on archival, as well as practice-based research, the body and its sensorial capacities are central to her approach.

She has presented her work in galleries and artist-run centers across Turtle Island, including: Plug In ICA, Doris McCarthy Gallery, InterAccess, VIVO Media Arts Centre, Satellite Gallery, Audain Art Museum, Access Gallery, and Toronto Free Gallery, as well as internationally at The New School: Parsons (NY), Mind Art core (Chicago) and Club Cultural Matienzo (Argentina). She received her MFA from Simon Fraser University and her BFA from OCAD University. Alize has curated a number of exhibitions, most notably Restless Precinct (2014), a site-specific exhibition at Guildwood Park in Scarborough ON, in collaboration with Orev Katz, a.k.a. Radiodress. Her curatorial approach seeks to highlight voices and perspectives that storytell edges, in-betweens, and possible futures.

She has been a sessional instructor at OCAD University since 2015, where she teaches a variety of courses in both the Sculpture/Installation and Integrated Media departments. She is currently the Curator in Residence at Humber Galleries.

Xuan Ye is the prototype of many objects, one of which is a.pureapparat.us. X’s interdisciplinary research-creations take shape as multimedia installations and (sonic/somatic) performances, vacillating within the spectrum of the habitual, the unusual, the perpetual, and the ephemeral.