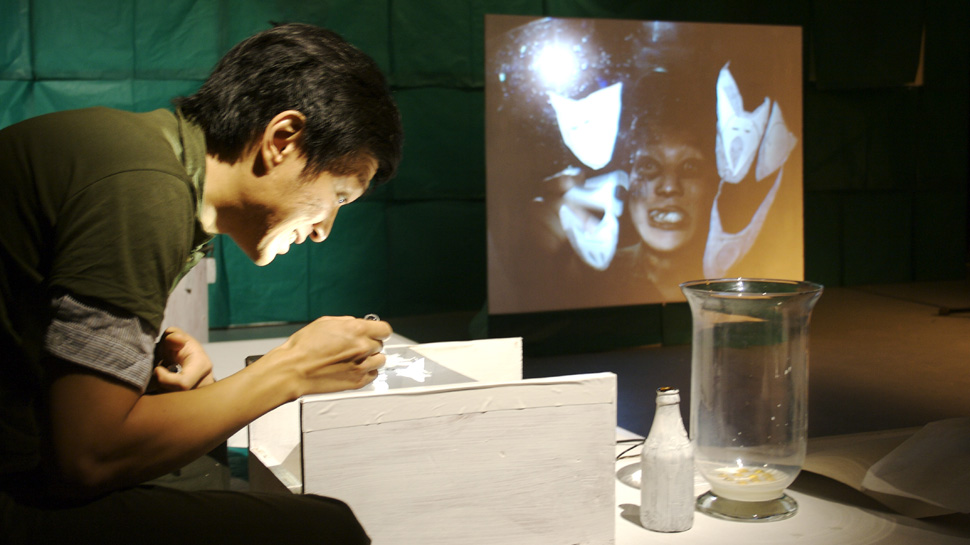 Incorporating electronic music, performance, drawing, and both live and pre-recorded video, In the Room 3 weaves in and out of a dream-like state of memory and imagination, operating in a world that subscribes to its own internal rhythm and logic. Here seemingly simple actions take on magical qualities: ping pong balls are dropped into a glass vase to reveal a drawing at its base; a wall of coloured tissue paper rustles with the wind from a body walking past; a man draws faces with marker and spit as his intimate images are simultaneously projected into the center of a room; he tells a strange story:

I see a girl’s profile, and from far away, it looks like she is wearing a beautiful pearl tiara. So I go up to her and ask her, and ask her, “Where’d you get that tiara?” And I realize that it is not a tiara, but her eyes, all connected, all around her head; and when she’s sad she cries from one of her eyes, and when she’s very sad she cries from all of her eyes, making herself very wet.

The visual, textual and sonic storytelling that makes up In the Room 3 grows out of an ongoing exchange between Sung Hwan Kim and dogr, whose collaborative practice moves across disciplines to create its unique form and structure.

In the Room 3 is presented in conjunction with Sung Hwan Kim’s exhibition In the Room which will be on view at Gallery TPW from April 7 to May 2, 2009.

dogr (David Michael DiGregorio) was born in Boston in 1979 and is now based in New York. With a background in Baroque, choral gospel and electro-acoustic music, as well as experimental 16mm filmmaking, dogr is a performing musician and composer who sings layered and spatial songs. His upcoming album, In Korean Wilds and Villages, is due for release on Sonig Records, Germany, April 2009. Recent performances include Établissement d'en face projects, Brussel, 2009; Insa Art Space, Seoul, 2007; Gallery 27, Uiwang, Korea, 2007; De Appel, Amsterdam, 2007; STEIM, Amsterdam, 2006; BAK, Utrecht, 2006. More at: www.dogr.org or www.last.fm/music/dogr or www.myspace.com/dognap