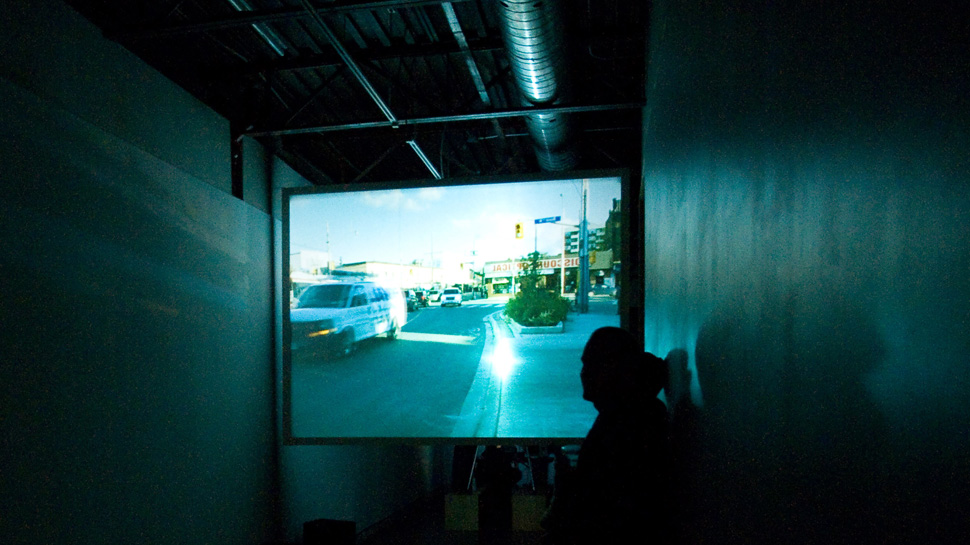 Gallery TPW is pleased to co-present a new work by Redmond Entwistle, the third event in conjunction with the Gallery TPW series You Had To Be There.

Underscoring the performative impulse inherent in the moving image event and the role of the cinema as a discursive space, Redmond Entwistle’s new project Satellite is a site-specific work for Gallery TPW and a deliberation on the intricate relationship to liveness and presence in film. Satellite documents the informal screening spaces located in storefronts around the city that diasporic communities establish for the communal viewing of satellite television. In doing so, Entwistle initiates a reflection on the role of the storefront space in art production and exhibition, effectively using the moving image to hold a mirror up to the space of Gallery TPW and the audience who chooses to assemble there.

Satellite is co-presented by Pleasure Dome (pdome.org) and the Liaison of Independent Filmmakers of Toronto (www.lift.on.ca).

Redmond Entwistle is an artist-filmmaker currently living in New York. Entwistle employs documentary and abstract modes of film-making, often investigating histories of social displacement and creating portraits of cities anchored on the invisible or the implied. Recent works include Monuments (2009), Skein (2007), and Paterson-Lódz (2006). Entwistle studied at California Institute of the Arts and the Whitney Independent Study Program. He has presented projects in recent group shows at Miguel Abreu Gallery (NY), Nought to Sixty (ICA, London) and has an upcoming solo exhibition at Art in General (NY).