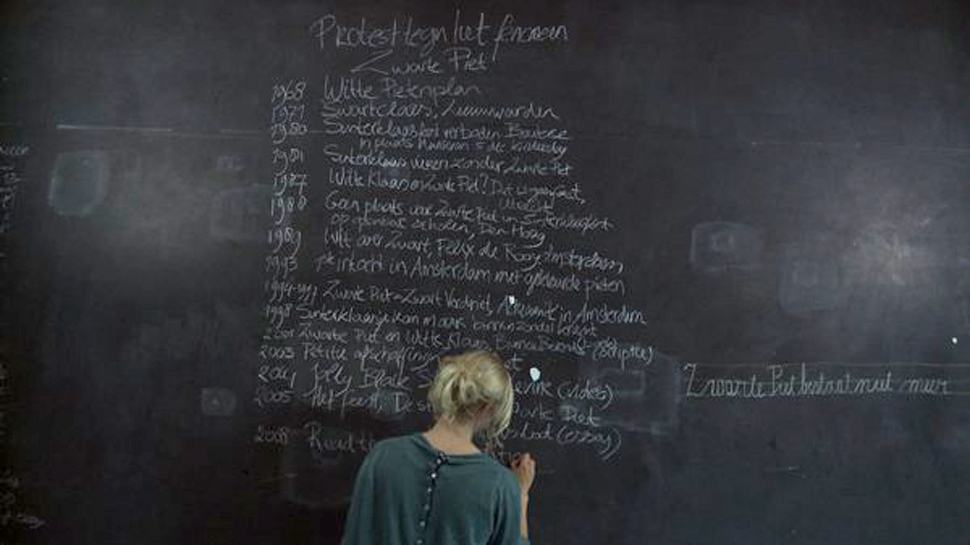 Read the Masks: Tradition is Not Given

The film Read the Masks. Tradition Is Not Given. (2009, 80 min) is part of an ongoing project of the same title by artists Petra Bauer and Annette Krauss, looking at the social and political implications of the Dutch tradition of Zwarte Piet (Black Pete).

The feast of Sinterklaas, in which Zwarte Piet appears, is one of the most celebrated Dutch traditions. Each November, Sinterklaas (Saint Nicholas) arrives in the Netherlands by boat (an event broadcast on national television) to bring gifts to the children. He is accompanied by numerous Zwarte Pieten, his black-faced assistants with red lips and dark curly hair. While this tradition is cherished in the collective memory of the Netherlands the problematic figure of Zwarte Piet has rarely been discussed in the mainstream media, as attempts to question this figure have generally met with immediate disparagement or ridicule.

The film captures the project’s trajectory, including the intense public response that it has generated since August 2008, when originally developed in the context of Be(com)ing Dutch, a two-year research project and exhibition at the Van Abbemuseum on issues concerning Dutch national identity. Read the Masks. Tradition Is Not Given. created multiple occasions to open the tradition of Zwarte Piet to public debate. After an installation at the Van Abbemuseum, a planned but cancelled protest march/performance in the streets of Eindhoven, and a public debate, this film marks the project’s fourth phase, reflecting on the media and discussions generated by the previous parts and putting the phenomenon of Zwarte Piet in a broader context.

This film acts as document, vehicle and pedagogical model, looking at an approach to difficult public discussion around people’s closely held, but rarely challenged, inherited cultural identities. U.K.-based artist, educator and curator, Janna Graham will moderate the discussion with one of the filmmakers Annette Krauss.

Read the Masks. Tradition Is Not Given. is presented in conjunction with: extra-curricular: between art & pedagogy.

Annette Krauss addresses the intersection of art, politics and everyday life. Exploring the possibility of participatory practices, performativity and investigations into educational structures, she is interested in questions of how norms and values control our perceptions, knowledge, and practice of everyday life, and how this contributes towards the development of human relations. Recent exhibitions include Becoming Dutch, Van Abbemuseum Eindhoven, Hidden Curriculum, Utrecht; Invisible Landscape, Lund Konsthall; Momentum Biennial, Moss; Soft Logics, Künstlerhaus Stuttgart, and Walden, Kunsthaus Dresden.