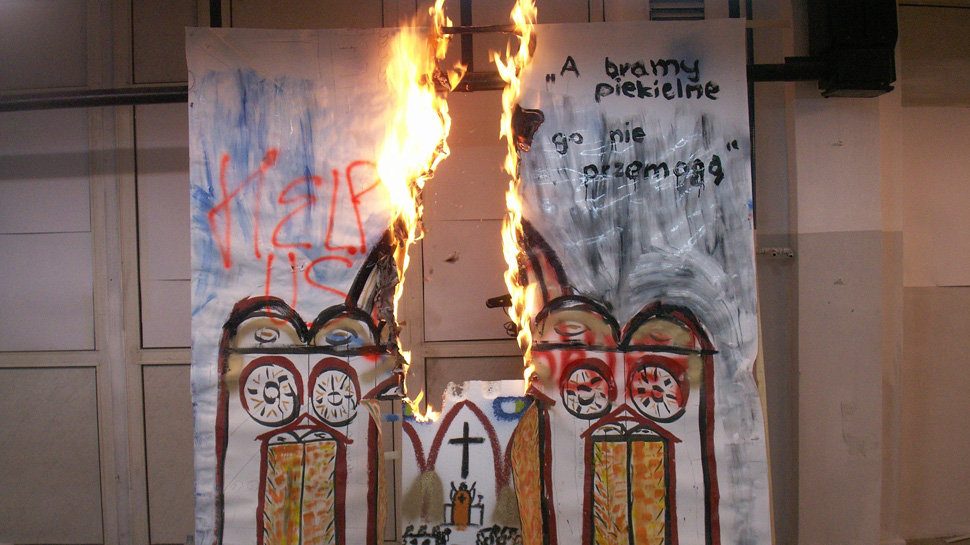 Gallery TPW is pleased to present work by Polish artist Artur Zmijewski, most known for his provocative and discomforting video work. Often inviting people to participate in social experiments, his documentary-style videos unabashedly rip open the safety nets and social contracts built into the terms of contemporary representation. In doing so, viewers are left to consider their own limitations in coming face-to-face with others potentially perceived as difficult or different.

For the exhibition during the Images Festival, TPW presents two seminal works from Zmijewski’s oeuvre. Them/Sie is the result of a workshop in which Zmijewski brings together representatives from conflicting Polish social groups. Participants each create a mural symbolically representing their ideological positions and are then asked to play a game allowing the “reworking” of each other’s images. What ensues is nothing short of war. In Singing Lesson 2 / Gesangsstunde 2 Zmijewski brings together a group of hearing-impaired youth to work with the Barockensemble der Fachrichtung Alte Musik orchestra in Leipzig, Germany. Together they collaborate on a performance of music by Johann Sebastian Bach. The result is an exhilarating and demanding social and sonic experiment in contrasts.

Artur Zmijewski was born in 1966 and resides in Warsaw, Poland. His video and photography has been extensively exhibited and critically reviewed. He represented Poland in the 2005 Venice Biennale and in 2007 was included in Documenta 12. Zmijewski is also on the editorial team of Krytyka Polityczna (Political Critique), a forum for left-wing political and cultural discourse in Poland: www.krytykapolityczna.pl. He is represented by Galerie Peter Kilchmann in Zurich.